Film - Korean100: A Hometown In Heart 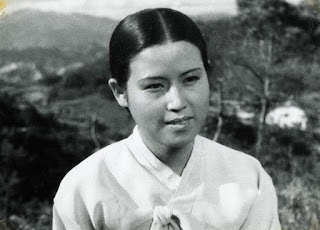 Tony Cross has set himself the challenge of watching all 100 of the Top 100 Korean films, according to KoreanScreen.com. Today he finds A Hometown in Heart (마음의 고향)...

This is the first in a series of reviews covering a Top 100 Korean films. I am following the www.KoreanScreen.com 100 for guidance. If you have other suggestions for Korean films I should watch then let me know. I decided to do this because in the last few years I have watched several Korean films. Indeed, I have reviewed them for The DreamCage. I find the films interesting enough to want to know more. Then the KoreanScreen.com list fell into my lap and so I thought this might be a good place to start.

Arbitrarily, although perhaps it is the historian in me, I have decided to watch them in release order, which means beginning with the earliest film on the list, A Hometown In Heart, directed by Yun Yong-gyu. A Hometown In Heart was released in 1949 [and is no.73 on the list - Ed]. But, before I say anything else, a little context.

From 1910 to 1945 Korea had been a Japanese colony, with all the oppression and suppression that comes with colonialism. Obviously, the defeat of Japan bought that situation to an end. The end of the war saw Korea divided. In the North, the Russians had invaded and taken control. In the South, the Western Allies – but let us be honest here and say America – had control. Or influence. Depending on where you were standing. The dividing line was the 38th Parallel. Korea’s misfortune was to find itself unable to become an independent country because well, the Cold War was just getting…er…warmed up. On 25th June 1950, the Korean War began when North Korean forces crossed the 38th parallel. The consequences of that are felt to this day.

It also had consequences for the Korean film industry. A lot of pre-1950’s Korean films were lost in the destruction. So, this 1949 film is a relatively rare thing. There are other surviving films.

Directed by Yun Yong-Gyu*, this was based on a successful play. Do-Seong (Yu Min) is a six-year-old who was left at a Buddhist Monastery by his mother at the age of three. She went to Seoul. He is being trained as a Monk. We see the routine of his day, but we also see that he is missing his mother and, as he watches other children, we see that he is also missing being a child. The Head Priest (Byun Ki-Jang) applies Buddhist ideas of karma. I have a low tolerance of child actors, but Yu Min is heartbreakingly good.

Do-Seong’s life is thrown into confusion by the arrival of a young widow from Seoul, played by Choi Eun-Hee. The widow takes a liking to him and there is an opportunity for Do-Seong to escape his certain fate. But an incident with the killing of a pigeon, brings that to an end. Do-Seong is a sinner born of sinning parents. To add to the heartbreak, Do-Seong’s real mother, played by Kim Seon-Yeong has tried to see him. The High Priest has refused. Gossiping temple workers give this away and the film ends with…well…let me not spoil it. Even if it is a sixty-one-year-old film.

I had to watch this on the internet, so the print was not magnificent quality, but this is a fine film. It is only just over an hour and fifteen minutes long but manages to convey a picture of Do-Seong’s life that makes you feel that he is getting punished for someone else’s wrongs. The High Priest is not heartless. He does however see things only through the lens of his beliefs. There is a moment when you think Do-Seong is going to get his wish. A moment.

There are no histrionics or melodrama. The performances of the main cast are all excellent. If you want to watch it, you can find it out there on the internet. It is a snapshot of a different country and a different time, which is one of the joys of it.


*I could not find out much about Yun Yong-Gyu. It looks like he ended up in North Korea making films there if his IMDb page is any guidance. If anyone has any further information I would love to hear it.
Follow Tony on Twitter @Lokster71
Image - Yun Yong-gyu (윤용규), Public domain, via Wikimedia Commons
Email ThisBlogThis!Share to TwitterShare to Facebook