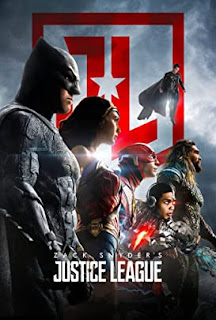 When it comes to DC films, my relationship with them has been shaky at best; I very much enjoyed Wonder Woman and, except from the Power Rangers style action at the end of Shazam, I very much enjoyed it. On the other hand, I had never felt the desire to leave the cinema early until I saw Suicide Squad and that was after watching Zack Snyder’s other DC instalments, Man of Steel and Batman vs Superman, which I recall bored me when I was younger. So, needless to say, I was only cautiously optimistic when I heard the announcement of Zack Snyder’s Justice League being released.

In case you don't know, Justice League (both the original and the Snyder cut) follows the story of a group of superheroes who intend to stop the end of the world at the hand of Steppenwolf, who plans to use ancient mythical devices known as “mother boxes” to bring Darkseid (Steppenwolf’s master) and ruin to planet Earth.

I was wrong to be so cautious about Snyder’s vision for the Justice League, as this film did justice to every character involved in it and does indeed need the 4-hour runtime to be enjoyed in all its glory. Considering the fact that we may not get a Cyborg movie now (at least not by the actor that portrayed him in Justice League) I would say this film achieved something incredible by giving him a clear and inspiring character arc.

Victor Stone, as we learn in the Snyder Cut (and played by Ray Fisher), was an American football player who clearly had ambition and desire to go far in his life until a fatal car accident causes his mother’s death and puts him in critical condition. His mourning father decides to take action to prevent the death of his son in using an alien “mother box” to save him, turning him half machine in the process. With this comes the fact that Victor not only blames his father but also bears the weight of dealing with how people might react to his physical appearance. However, after seeing that his father is willing to die for him and that there are others in the world who are unique just like him, Victor learns to understand his father’s actions and be more accepting of who he is, something that any young person can aspire to do.

Barry Allen (Ezra Miller), despite still having his own movie coming soon, also had a clear arc in this film, which I suppose is more important than ever if it’s to be believed that his movie will be focused more on Flashpoint than beginning with his origin story. From the beginning of Justice League we’re introduced to Barry as he’s applying for small jobs that he clearly doesn’t have a passion for and introduced to his abilities as he attempts to save a girl who we can assume is Iris West (potentially Barry’s future partner if you’ve seen the Flash TV show).

Over the course of the movie, Barry learns to believe in himself more, especially when the world needs him the most, as he travels fast enough to go back in time a few minutes in order to play his part in stopping Darkseid from invading Earth. The fact that, in the Snyder Cut, we saw him go back in time by a few minutes, helps to set up Barry going even further back in time in the Flash movie, if he truly is going to cause “Flashpoint”, the event that some who have read the comics or watched the CW show will know of.

One of the things that annoyed me about the original Justice League was that to me it never felt like a team movie, with this version being the length that it is, it truly felt like Superman was missing for long enough to want him back. To me, it also seems like we see fewer fight sequences with Superman in this movie which helps sell the idea that the whole team is important, whereas previously it seemed like the whole team existed just to bring back Superman.

The revelation that Superman’s death was the reason Steppenwolf chose to attempt another invasion of Earth (in service of Darkseid) also made it feel like there was real consequence for Superman’s death, which I think is more important than ever when your team up movie following Batman vs Superman is one where they bring back the hero who died anyway.

The icing on the cake has to be the epilogue, the fact that we get to see Jared Leto’s Joker interact with Batman before his departure from the DC universe is a testament to the fact that Snyder will always do what he thinks is important for his characters and not what he thinks the audience will like. I honestly never would have predicted that we would even see this Joker again and, quite honestly, I didn’t think I wanted to, until I heard the old croaky laugh of the Joker and how much Batman has clearly changed in this prophesied future Earth.

Despite the clear importance of Amber Herd's character Mera in this vision for Zack Snyder’s DCU (which probably could have used some reshoots with a recast of the role) I would have loved to have seen this future come to fruition, perhaps before Barry finds a way to fix it all by going back in time or, perhaps more interestingly, if the future that Snyder presents to us cannot be undone and that was indeed the twist of the final movie in this pre-planned series of films.
Follow Kraig on Twitter @Kraigandhismac
Images - IMDb
Email ThisBlogThis!Share to TwitterShare to Facebook