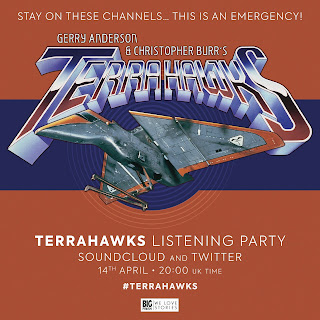 Terrahawks! Stay on this channel! To celebrate Gerry Anderson Day on April 14th, Big Finish is hosting a Terrahawks social media listening party and you can join in the fun for free...

In the not too distant future, the Earth finds itself under constant threat from Zelda, a blood-thirsty android who, along with her fiendish family and monstrous creations, has established a base on Mars. The only thing standing between this evil queen and her quest for the ultimate annihilation of mankind are the Terrahawks – an intrepid band of heroes led by the stern but fair clone, Doctor Tiger Ninestein.

On Wednesday 14th April at precisely 8pm (UK time), an exclusive Big Finish listening party will get underway, with a free livestream of three episodes of Terrahawks – volume one episodes, Clubbed to Death and Into the Breach and volume two episode, Sale of the Galaxy, which stars long-term Gerry Anderson collaborator, the late Nicholas Parsons.
The three episodes streamed back-to-back are as follows:

A night on the town turns deadly for the Terrahawks when the desperate proprietor of a hot new club just so happens to be in serious debt with Zelda’s new loan shark venture.

Into the Breach by Mark Woollard

The Zeroids face termination when Ninestein and Hiro roll out their newest creation - the Cyberzoids. But will these super-soldiers be enough to fend off a direct attack on Hawknest from Zelda's mothership?


Sale of the Galaxy by Andrew T Smith and Jamie Anderson

Ninestein and Zelda both receive invitations to appear on a gruesome gameshow – The Sale of the Galaxy. But will grim gameshow host, Nickel-plate Starsons’ personal history with Zelda influence the outcome of the game?

For the duration of the listening party, these audio adventures will be available to stream for free on SoundCloud in their entirety, so that Terrahawks fans worldwide can join in and listen together simultaneously. (Of course, people who have previously bought the stories may prefer to listen to their own personal CD or download copy. That’s fine!)

Meanwhile, on Twitter, actors and writers from the series will be tweeting along, chipping in facts and memories of the stories using the hashtag #Terrahawks.

How to join in: