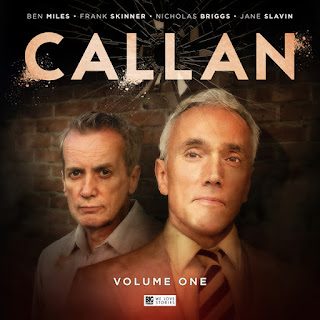 Ever wary of a remake, Susan Omand headed undercover to listen to Volume One of Callan, thanks to Big Finish...

Detective David Callan was one of those characters that kind of broke the mould back in the day. Gone was the suave sophistication of British Secret Service agents like James Bond or even John Steed of the Avengers, all jingoistic snobbery and aggression in expensive suits, and in came a down to earth, fair-minded, almost empathetic, gruff anti-hero type who, although a crack shot with a military background, cared slightly too much about the “why” as well as the “what and how” of the work of the MI5-esque department he worked for, The Section. It was refreshing at the time, humanising a role too often seen in fiction as “a glamour job,” but, when I heard a couple of years back that Big Finish had picked up the character to remake some of his cases as full-cast audiodramas, I must admit I had my reservations. Would the stories, and Callan himself, stand up against the much harsher detective/spy stories we’re used to these days? It was that concern that stopped me from trying Volume 1 of the Callan stories until now.

I needn’t have worried. They’re all great fun and I wish I’d listened to them sooner.

After a nicely noirish intro of the original TV theme music that immediately brought that swinging lightbulb back to mind, I settled into the first of four case files in the box set.

File on a Deadly Deadshot is well described by a quote from the story itself, where Callan says to his boss, Hunter, “So you’re sending me to Northumberland to shoot an Arab with a Purdey shotgun” as Callan is sent undercover to an aristocratic shooting weekend at a large country estate. However, he’s not going after “the Arab” himself, instead he’s going after the assassin who has been tasked with doing the shooting. But there’s a problem… nobody knows who the assassin is. A fast paced, simple plot with good humour and exciting mid-story cliffhangers, this was a great introduction to the sharp-shooting ex-Army man Callan, whose backstory is famously never fully revealed, and Lonely, his fearful but sneaky, and very smelly, underworld sidekick who, here, comes in very useful indeed and not just for pressing Callan’s purple velvet jacket as his valet.

Next up we head to the casino, although it’s not the Royale, where Callan has to lose money, a LOT of money, in order to attract the attention of some nefarious foreign agents. Unfortunately, there’s more than a hand of Brag at stake and it takes a friend of a friend to keep him out of even bigger trouble. This is another highly enjoyable story, with twists and turns as other agencies get involved meaning that it would reward multiple listens to get the most out of the intelligent storyline. The sparring, both physical and verbal, between Callan and his Section colleague Meres, who really does try to live up to the sophisticated glamour of the job, was great fun and Meres was well characterised by Tam Williams. I also enjoyed the fact that Liz (Jane Slavin) got to get out from behind her desk, if only for a short while. The introduction of a possible nemesis has opened up some fun possibilities for future stories and I thought it was a nice touch that the casefile colour coding system used in the original stories got a passing mention with this being a Red File - Dangerous targets of most urgent priority, marked for death.
The third File on the list sees Callan reunited with Meres and heading to the exotic location of Venice! BTW a chase through the canals isn’t the only Bond-like reference in this story – keep your ears open for a nice name drop. The main plot sees a Russian poet wish to defect to the west and the opportunity arises with an invitation to the Venice arts festival, the Bienalle. However, as always, The Section are not the only agency involved. As well as the main cast this time, mention has to be given to the absolute tour de force performance of Beth Goddard as Ms Cynthia Widgery, part time bird watcher, full time feminist and the Awesome Amateur of the story’s title, who is the guiding hand behind the defection plan. I also loved the initial fancy dress outfit choice for Meres and how they resisted the obvious joke (you’ll know it when you don’t hear it) must have taken a lot of willpower.

The last of the four stories sees the focus of Callan’s attention shift onto his boss, Hunter, the Harassed Hunter of the title and a job that is, shall we say, a little more personal in its motivation. “You’re coming with me? To Newcastle? To meet an informant?” Yes, Callan, that is the general gist of the plan with a few “exceptional circumstances.” It is those circumstances which allow Nicholas Briggs, as Hunter, free rein on his acting chops with a stunning, but beautifully restrained and emotional, performance of a character that, up until now in this set of stories, has been aloof, detached and business-like to the point of being utterly ruthless. To see, or rather hear, that softer, more vulnerable side shine through was exceptional indeed and a very fitting denouement to an excellent box set of stories.

I also really enjoyed the “box set extras” of the short interviews with cast and creatives at the end of each story. It helped to give the main characters some context for those who maybe aren’t as familiar with the short stories or TV series [aren’t as ancient as you, you mean – Ed] and it was interesting to hear Peter Mitchell, who did the audio adaptations of the stories, talk about the connection that it gave him back to his much-missed father, James, who originally wrote the Callan tales. As an aside, I do think it helped the adaptations that they had that familial connection to the original as it made them feel more authentic to my mind.

The thing that works best for me though is the main casting. I remember watching re-runs of the Edward Woodward TV series and, here, Ben Miles as Callan has that same gritty, but disciplined, world-weariness that Woodward portrayed so well. Frank Skinner too feels like a natural successor to the hang-dog Russell Hunter as Lonely. Their pairing also feels a bit more like an equal, if dysfunctional, partnership this time, more than Callan just cynically using his informant. I really bought into the chemistry between them and it’s fantastic that Lonely gets more of the aural limelight in these audiodramas.

Each of the four stories in Volume 1 is about 50 odd minutes long, so they felt very much like a TV episode and perfect for “one a night” listening just before bedtime. With Ken Bentley’s action-packed direction and a dramatic sound design by Steve Foxon, they are very cinematic and I never felt like I missed the visuals at all, even though I would love to see Callan getting another TV airing at some point, especially with this cast. Volume two of Callan’s case files came out from Big Finish late last year and is now high on my list of “catch ups” to listen to.