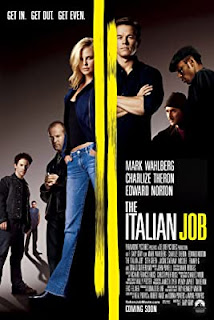 Without blowing the bloody doors off, but with slight spoilers, Steve Taylor-Bryant watched The Italian Job. No, not that one, the 2003 remake...

I know there’s a lot of people out there fed up with remakes and reboots and lament the lack of creativity in modern Hollywood but sometimes I don’t mind them. I know it’s not a lack of creativity, there are so many good writers out there in filmland, it’s studios wanting risk-free dollar returns for bums on seats. I get it, a popcorn entertainment extravaganza with a who's who of action stars is certainly less risky than an intriguing twist story made by and starring unknowns and, on occasion, I like to unplug my overactive brain and drool in front of something non taxing. Some remakes or reboots aren’t great but occasionally there are some stunning interpretations of the original like The Manchurian Candidate or Oceans 11, both far superior to the original films, that were both pretty great to be fair. Sometimes people don’t know about the original and aren’t so vitriolic when a remake comes out, my aforementioned examples both did well and the majority of the audience didn’t have a clue the Sinatra films existed, but sometimes people are incredibly harsh just on the announcements of a remake due to their undying love of the original which brings me to 2003’s The Italian Job.

I really like the Michael Caine film. It was pretty clever, very witty, but outside of the “bloody doors” quote there’s not much to go on the defensive with when someone forty years later thinks they have a heist movie idea worth exploring. The original rarely appears in people’s “best ever” lists so why so much hatred? Did I like F. Gary Gray’s remake? Yes. It was, like the original, pretty smart and very witty and was cast well and an enjoyable couple of hours were had. Like the original it’s not in my best ever list but I enjoy heist movies and this one is pretty good to be fair to it.

Led by John Bridger (Donald Sutherland) and Charlie Croker (Mark Wahlberg) a team is assembled for one last heist to steal $35 million in gold bars from a heavily guarded safe in Venice, Italy. After successfully pulling off the heist, a team member, Steve (Edward Norton), driven by greed and jealousy, arranges to take the gold for himself and eliminate the remaining members of the group. Thinking the team dead, he returns to Los Angeles with the gold. Charlie and the survivors of this betrayal follow Steve to L.A. to exact revenge against the traitor. Charlie enlists the help of John Bridger's daughter, Stella (Charlize Theron) - a professional safe cracker - to get revenge. With Stella and the hacking skills of Lyle (Seth Green), the explosives skills of "Left Ear" (Yasiin Bey), and the driving skills of "Handsome" Rob (Jason Statham) this new team plans and executes a daring heist that weaves through the freeways and subways of L.A.

The heist in Venice at the start of this film was great. It had clever elements mixed with car chase action, albeit on boats, and seeing Ed Norton shoot Donald Sutherland was something I was not expecting on first watch. That early death lent some emotional weight to rest of the film that was maybe a bit more generic action movie than I’d hoped for but, with a very understated Mark Wahlberg and some real comedic moments from Seth Green who is always value for money and Yasiin Bey (billed then as Mos Def) as Left Ear, the film moved at a pace, didn’t drag, and entertained whilst not demanding much from its audience... much like the original. There was some great stunt work, nods to what came before with the inclusion of both the original Mini and the new model, enough decent heist tropes to carry to the story and, with most of it done without digital effects, it’s actually quite refreshing to watch back.

It ended a little too easily for my tastes, the literal cliffhanger of the original was a better finish, but no harm was done to Caine’s legacy, no damage was done to movie making, and outside of Guy Ritchie films it’s probably the most bearable Jason Statham has been. I guess my point is that the world is a serious place with actual issues at stake for people and sometimes a little escapism is warranted. Stop holding onto past greats like they are the only thing that matters and switch off for a bit.
Follow Steve on Twitter @STBwrites
Synopsis and image - IMDb
Email ThisBlogThis!Share to TwitterShare to Facebook