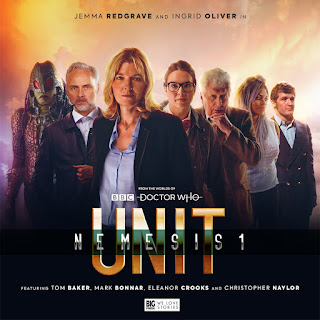 It’s time for Kate Stewart and her team to meet some familiar faces for the first time in UNIT: Nemesis, released in November by Big Finish...

It’s packed full of alien adversaries. Alongside the previously-announced Ice Warriors, these adventures find the UNIT team battling malevolent Time Lord the Eleven (Mark Bonnar) through the streets of Edinburgh and beyond, whilst teaming up with the mysterious Curator (Tom Baker) in the Under Gallery. This volume marks a brand-new era for the UNIT team and the beginning of a new four-box-set arc of adventures.

The four formidable features are:

The Enemy Beyond by Andrew Smith

In a UNIT facility beneath Edinburgh Castle, Kate and Osgood work to unlock the mystery of a stone arch discovered buried in a prehistoric rock formation.

When the arch takes one of their number away to a strange, bleak world, it leads to an encounter with a Time Lord. One with multiple personalities. Soon the Eleven is loose on the streets of Edinburgh and plotting to seize the arch from UNIT by any means necessary.


Fire and Ice by John Dorney

When Kate needs Harry Sullivan’s help with a threat from the Eleven, she and Osgood travel to Australia to meet him. He’s there with Naomi Cross, investigating footage of an apparent UFO crash that turned up on social media.

They find themselves caught in the middle of a conflict between Ice Warriors. And one Ice Warrior isn’t so icy –in fact, he’s red hot. And getting hotter...

A series of jewel robberies in London and the Home Counties draws the attention of UNIT when it’s discovered that some of the stolen gems are alien in origin.

The robberies are the work of an organised criminal gang led by East End villain Ava Drake. But Ava has a new, ruthless partner. The Eleven has promised her riches, and for him the gems are a means to defeat UNIT and regain the arch.


The Curator’s Gambit by Andrew Smith

The arch is taken to the Under Gallery for safe keeping, under the protection of the Curator. When the Eleven penetrates the Gallery’s security, the Curator initiates an emergency plan. He and UNIT play a game of cat and mouse with their pursuers within the Under Gallery’s original location, Hampton Court Palace.

Actress Jemma Redgrave said: “I love the scripts for the UNIT series – I think they’re really well written, and these are no exception. This is a really exciting adventure, and it’s the first time I’ve encountered the Eleven – it’s an extraordinary thing to hear Mark Bonnar create eleven completely different personalities so distinctively, brilliantly and terrifyingly. He does it all effortlessly – it’s a masterclass. I loved every minute of it.”

Actress Ingrid Oliver added: “I absolutely loved doing these scripts, because we had someone new to play with – the Eleven! It’s always fun when you get an actor who is doing so many different parts, and it’s great to also have the old gang back together too.”

UNIT – Nemesis 1 is available to pre-order as a collector’s edition CD (for just £24.99) or a digital download (for just £19.99) exclusively from www.bigfinish.com.

Big Finish listeners can save money by pre-ordering the bundle, containing all four volumes in the UNIT – Nemesis series, for just £88 (as a collector’s edition CD) or £79 (as a download).

Please note that Big Finish is currently operating a digital-first release schedule. The mail-out of collector’s edition CDs may be delayed due to factors beyond our control, but all purchases of this release unlock a digital copy that can be immediately downloaded or played on the Big Finish app from the release date.
Image and info - Big Finish
Email ThisBlogThis!Share to TwitterShare to Facebook