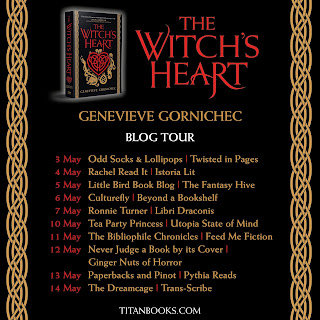 We're honoured to be part of the final day of the Titan Books tour for Genevieve Gornichec's debut novel, The Witch's Heart. In an exclusive guest article for us, she shares her thoughts about Why the Norse Myths, and How We Talk About Them, Still Matter...

One of the most frequent questions I’ve been asked in interviews surrounding The Witch’s Heart is why I think the Norse myths still resonate with us today, despite being written down eight hundred or so years ago and composed even earlier than that. Even with the recent resurgence of interest in mythology-based fiction, it’s a question that really made me think.

When I was first asked this, I used to say that there must be something universally human about mythology in general, which is why it’s endured so long. We must find something in these tales that we deeply connect with, regardless of modern advances. But as I kept studying, I started to realize that it’s also really important to remember how they got to us, and who got them there.

Recent translations of old classics, like Emily Wilson’s translation of The Odyssey and Maria Dahvana Headley’s translation of Beowulf, have shown us that how words are rendered matter. I can’t speak to other mythologies—I’m versed in Greek and Roman, but not enough to talk about them in this capacity—but in the case of the Norse myths, so much of what’s in the public consciousness is inherited from Victorian-era scholars and their nationalistic agendas.

Right now, scholars in Viking Studies are working tirelessly to break down this view of Vikings (which was a profession, not a race of people), amid accusations of trying to project our own views into the past. But there is a difference between reading history with modern biases, and exploring history from a different perspective.

Despite the fact that the Icelandic sagas, whose historicity is debatable, do clearly indicate that Viking Age Scandinavia was a fiercely hypermasculine society where you could legally kill a man for insulting your manliness, there are two things to keep in mind: 1) The sagas were written down much later than the Viking Age by Christians, and 2) the Norse myths themselves are very queer, no matter how you slice it.

The evidence is right there in the Prose Edda and the Poetic Edda, our two main sources for Norse mythology, both recorded in the early thirteenth century in Iceland. Author Linnea Hartsuyker’s 2019 article "Queer Asgard Folk" for The Public Medievalist’s special series entitled Gender, Sexism, and the Middle Ages sums up some of the queerer aspects of the mythology quite well, from Loki’s genderfluidity to Odin’s use of seid or seiðr, which was considered to be women’s magic.

What does this say about the people who lived in the Viking Age, who worshipped these gods? Amy Jefford Franks goes into detail about this in their podcast, Vikings are Gay! Outside of academia, it’s so interesting to note how many people have taken this aspect of the mythology to heart — in the best possible way.

From fans of Marvel’s Loki to modern-day practitioners of Norse paganism, some of whom are the most inclusive and welcoming people I’ve ever met, there is a movement toward questioning everything we were told about the Vikings, and you truly love to see it. I feel like I learn something new about the Norse myths every day, because no matter how long ago they were written down, the way we talk about them and think about them now matters. And I think that’s why the heart of Norse mythology is still beating strongly today.

One of my goals in writing The Witch’s Heart was to foster more conversations about how the Norse myths are interpreted, and I’m so grateful to The DreamCage for hosting me today. Thank you so much, and if you pick up the book, I hope you enjoy it!
Many thanks to Genevieve for a fascinating article and to Titan Books for including us in the tour. Please do visit the other websites/blogs on the tour - the full list is at the top of this article. 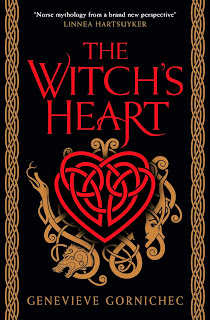 ABOUT THE WITCH'S HEART, out now from Titan Books

When a banished witch falls in love with the legendary trickster Loki, she risks the wrath of the gods in this fierce, subversive debut novel that reimagines Norse myth.

Angrboda's story begins where most witch tales end: with being burnt. A punishment from Odin for sharing her visions of the future with the wrong people, the fire leaves Angrboda injured and powerless, and she flees into the furthest reaches of a remote forest. There she is found by a man who reveals himself to be the trickster god Loki, and her initial distrust of him and any of his kind grows reluctantly into a deep and abiding love.

Their union produces the most important things in her long life: a trio of peculiar children, each with a secret destiny, whom she is keen to raise at the edge of the world, safely hidden from Odin's all-seeing eye. But as Angrboda slowly recovers her prophetic powers, she learns that her blissful life and possibly all of existence is in danger.

Angrboda must choose whether she'll accept the fate that she's foreseen for her beloved family or rise to remake it.