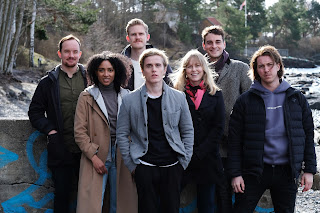 Netflix have announced Blasted inspired by the real-life UFO-phenomenon in Hessdalen, Norway...
Press Release
Coming next year, the comedy Sci-Fi film will be directed by Martin Sofiedal, written by Emanuel Nordrum and produced by Are Heidenstrøm (The Wave) at Miso Film.

Blasted follows childhood friends Sebastian (Axel Bøyum) and Mikkel (Fredrik Skogsrud), who are reunited for Sebastian’s bachelor party. While Mikkel never matured past teenage laser tag-prodigy, Sebastian has grown into a career-obsessed workaholic who’s using the party to schmooze a potential client. But when the bachelor party stumbles head-first into an alien invasion, it’s up to Mikkel and Sebastian to reunite as the kick-ass lasertag duo they once were and fight back.

Are Heidenstrøm, Producer and CEO of Miso Film Norway said “It is very exciting to be the first Norwegian Sci-Fi comedy in production. We feel very privileged to work with Netflix and to make a film in such an unorthodox genre. Emanuel Nordrum and Martin Sofiedal have created an amazing story where we finally get clarity in the light phenomenon in Hessdalen.”

Claire Willats, Director, International Original Film Nordics added “Miso Film has been fantastic partners throughout the years and we are looking forward to introducing Blasted to our members worldwide with it’s bold new concept to come out of the region, sharp humour and enjoyable action scenes. With such a talented creative team and Martin Sofiedal directing, I’m expecting this film to be a fun and fresh addition to our growing Nordics film slate.”
Image - Netflix
Watch Blasted on Netflix in 2022
Email ThisBlogThis!Share to TwitterShare to Facebook