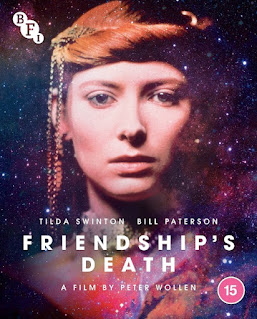 Tilda Swinton and Bill Paterson star in the Peter Wollen film Friendship's Death (1987), released on Blu-ray/DVD and streaming platforms in June, thanks to BFI...

On a peace mission to earth, Friendship (Tilda Swinton), an alien, has missed its intended destination, instead inadvertently landing in Amman, Jordan in 1970 during the civil strife of ‘Black September’. Here, Friendship meets Sullivan (Bill Paterson) a world-weary Scottish war correspondent and the pair are holed up in a hotel as the conflict rages outside. Made in 1987, Friendship’s Death is a unique and intelligent sci-fi exploring the unlikely relationship which develops between Friendship and Sullivan and their animated dialogue, discussing life’s big questions.

Directed by celebrated film theorist Peter Wollen (and his only solo feature) and newly remastered in 4K by the BFI National Archive, Friendship’s Death, which world premiered at the BFI London Film Festival 2020, is available on Blu-ray/DVD (Dual Format Edition) for the first time. Extras include a newly recorded audio commentary with BAFTA-winning producer Rebecca O’Brien (I, Daniel Blake) and cinematographer Witold Stok (Close My Eyes), a discussion reflecting on the film, recorded at the BFI London Film Festival, including Tilda Swinton and Bill Paterson, plus a filmed discussion appreciating the wider work of Peter Wollen.

Political and eerily prescient in its contemplation on the relationship between humans and machines, working through some of Peter Wollen’s lifelong obsessions and enthusiasms, the film expands on the themes of alienation and existentialism, for example, that Wollen had explored in his script for Antonioni’s The Passenger (1975). Friendship’s Death’s sharp intellect and wit, coupled with outstanding performances from its two leads, including Tilda Swinton in only her second feature film role, makes this a truly compelling work for audiences to rediscover that feels remarkably relevant today.
Friendship's Death is released on Blu-ray/DVD, BFI Player, iTunes and Amazon Prime on 21st June 2021