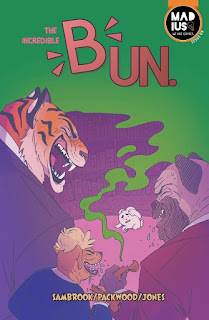 Susan Omand rabbits on about the latest issue of family-friendly comic The Incredible Bun, out soon from Madius Comics...

I’ve been asked… nay, ordered… by the venerable Mike Sambrook, writer of this comic series, NOT to give away any spoilers in my review of this, the third issue of The Incredible Bun. Therefore I won’t, I’ll just give you the official Incredible Bun synopsis [the Bun-opsis? – Ed]:

“Bun follows the tale of a giant rabbit trying to make his way in a strange and confusing world. An ugly duckling story overflowing with colourful characters, surprising twists n’ turns and a whole lot of heart.

“Bun never quite fit in with his family, probably because he’s about ten times larger than the rest of them. Feeling like an outcast and as though he didn’t belong, he heads to the city to try and find his purpose in life. Things don’t exactly go smoothly for him. Follow this poor old Bun’s journey into a city that’s bright, loud and very very confusing. He’s going to need all the help he can get!”

So, since I can’t give you spoiler-y stuff, what can I tell you about Bun #3? Firstly, and probably the main reason that I can’t give spoilers, is there’s a lot of reading in this issue, and I mean a LOT. There’s information and explanations, backstories filled in and reveals revealed this time out, adding much to the characters and their situations introduced in the previous two issues. Characters who you didn’t think were important to the tale suddenly come sharply into focus and tiny snippets that you may have missed first time around now make you go “oh, right!” as you realise the thing about the thing [way to be vague – Ed]. However, it never feels like a slog to get through all the writing as it is very cleverly handled by Sambrook, both in terms of content as well as placement and delivery, with Rob Jones ever reliable on the lettering, and in no way causes a drop to the pacing or enjoyment of the story. In fact, I’d say the story gets even better as we find out [*redacted* – Ed] which gives a marvellously noirish feel to the whole thing.

I adored Rosie Packwood’s art even more in this issue too, with some properly laugh out loud funny panels that go above and beyond the story itself. Also, I loved the colour palette shifts this time where, as well as the subtle pink/orange pastel colours that we’re used to, there’s now a zing of greens throughout, mixed with neon pinks and rich purples in the boxing scenes, echoing Alexa Renee’s colours on that glorious cover, and beautifully muted down to grey/greens in a sad scene near the start [are you allowed to say that? – Ed] that really add to the pathos and emotion of that bit of the story. As Mike says himself, “Rosie is a force of nature” and with that I wholeheartedly concur.

All in all then, a strong third issue. Not a jumping on point for the story, I admit, as you do have to know what’s gone before, in order for all the exposition to make sense and be relevant, but it provides much fun and adventure along the way, giving an ideal set up to the fourth and, by the sounds of it, final issue for the giant rabbit that is really living up to his name – yes, The Incredible Bun really is incredible.