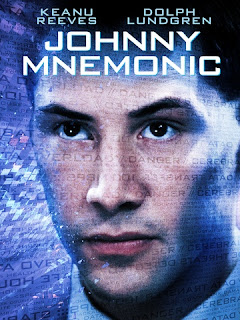 With the film celebrating its 25th anniversary this year and getting an HD digital release on Monday, thanks to Vertigo Releasing, here’s a look at exactly how close we are to the world of Johnny Mnemonic...

THE YEAR IS 2021. Yes, you say, we’re well aware of that, it’s nearly summer… No, bear with me. What we mean is, the Keanu Reeves, ahead-of-its-time sci-fi action thriller Johnny Mnemonic is set in 2021! Now celebrating its 25th anniversary, with an HD digital release, the film made some pretty startling predictions at the time about the internet, smartphones, virtual reality and social media.
Some came to fruition, others were way off the mark, and some were just plain ridiculous. It’s fun though to see how Hollywood saw the ‘future’ back then - and also to realise how fast things have changed. 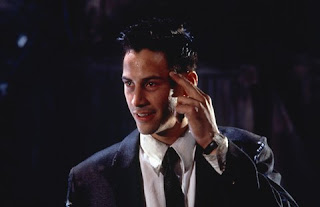 In the film, Reeves plays a data courier, who transports important or top secret information implanted into his head. The film was quite canny in predicting hacking on a global and corporate level (the author of the source novel, William Gibson, is regarded as a bit of a prophet in this field). What it is not so spot on about, is the amount of data that these in-demand couriers can carry for their clients. Johnny boasts: “I can store 80 GB in my brain”, but he must transport a whopping 320 GB! About the size of a £25 external hard drive then! 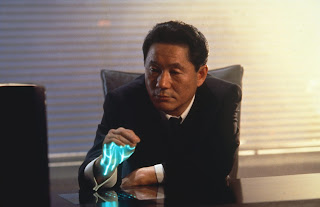 At the start of the film, it ominously states that in the second decade of the 21st century “corporations rule”…well, we now live in a world where small number of massively powerful companies gobble up profitable independents, absorb or eradicate competition, and pretty much have a hold on everything we buy or do - so Johnny Mnemonic was bang on the money with this prediction. 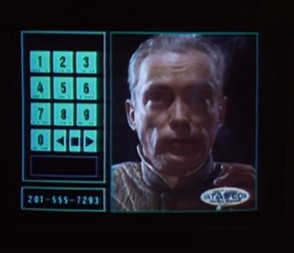 Right off the bat we see Johnny using what appears to be a kind of clunky Skype facility (Skype itself debuted in 2003). Back in 1995, someone talking to their monitor might have seemed rather peculiar, but nowadays we’re all at it. 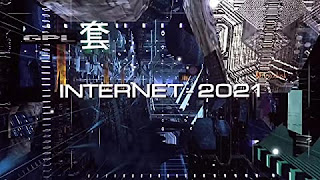 In Johnny Mnemonic, everyone seems to be doing everything through a single screen - watching TV, shopping, computery stuff - what is going on! Bear in mind the film was released before the real power of the internet had been realised - and Google wasn’t even created until 1998… did this film invent what we now know as the world wide web and how we use it!!? And for anyone who grumbled in the 90s that the internet was a ‘fad’ - as someone in the films says, “you low-techs will regret this!” 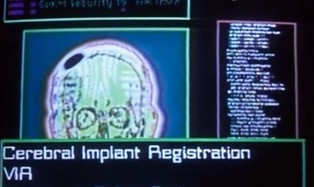 When Johnny enters the Free City of Newark, he has to go through a full body scan at immigration control. It seems that the powers that be watched this film, because they now have these at every airport! 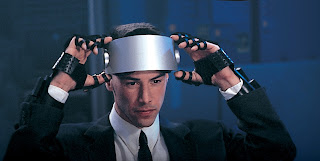 After Johnny has broken into a computer store, and is busy building his own rig, Johnny asks his sidekick Jane (Dina Meyer) for what sounds like some ‘Thompson iPhones’. Now, iPhones weren’t invented until 2007 (although it wasn’t Thompson that made them). Of course, he may have been referring to ‘eyephones’, the silver wraparound goggles he wears to surf the three dimensional web-world - in which case he was simply predicting Virtual Reality headsets!

Johnny uses a little portable plastic key-pad device that is very similar to the card readers we all use today to access our online bank accounts. Of course, Johnny uses his to hack a shielded phone line, rather than to check his direct debits. Jane suffers an episode of the ‘black shakes’, and Johnny takes her to a shady tech doctor called Spider (Henry Rollins), who informs Johnny the dangerous condition is caused by “Information overload, all the electronics around you poisoning the airwaves!” Sounds like he’s talking about the ill-effects of ever-present, inescapable, all-consuming social media, a quarter of a century ahead of the fact!

JOHNNY MNEMONIC WILL BE RELEASED ON DIGITAL PLATFORMS IN HD ON
10TH MAY 2021
Images & info - press release
Email ThisBlogThis!Share to TwitterShare to Facebook