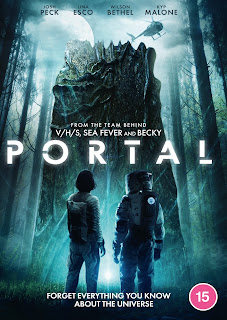 With the film now available on Digital and DVD thanks to Signature Entertainment, Ren Zelen opened the door to Portal (aka Doors in the US)...

Portal comprises of a trio of sci-fi shorts from the crew behind the V/H/S horror films. Creator/producer Chris White and creative director Saman Kesh teamed up with directors Jeff Desom and Dugan O'Neal to film three segments, each offering a different perspective on the same story.

Released in the US as Doors but renamed Portal for the UK, the three short films examine the experience of contact with a particularly cryptic alien entity. The story begins when, without any warning, a million giant doors, covered in what look like pulsating, sentient iron-filings, appear all over the Earth.

Some of those that encounter these animate doors feel drawn to them. They hear beckoning voices and when they get in close proximity they are sucked inside and disappear. By contrast, those unaffected stay behind to try to unravel the mystery of what the portals are and what their purpose on Earth might be.

The opening segment, entitled Lockdown, introduces the arrival of the portals as seen through the eyes of a group of high school students who start the day in detention. For Ash (Kathy Khanh Nguyen) Jake (Aric Floyd) Lizzie (Julianne Collins) and Rory (Rory Anne Dahl) the session begins ordinarily enough but it soon becomes clear that something frightening is happening outside. All their confiscated phones begin ringing, including the invigilating teacher’s, who takes the call but then rushes from the classroom.

The kids get increasingly distressed as they hear army jets whooshing overhead and birds begin to slam themselves into the windows. When they break out of their locked-down classroom, they find the school deserted and a huge, gently pulsating portal blocking the corridor out.

Lockdown serves to set the scene for the mystery of the shimmering portals, while the second segment, Knockers, takes place a few weeks after the phenomenon has begun. It serves to provide a glimpse into what happens to the people on the other side of these strange gateways.

Hoping to determine the reason for the arrival of these cosmic visitors, the government enlists volunteers to cross the thresholds to learn more about their origin. ‘Knockers’ is the nickname given to the volunteer researchers who cross over and then hopefully return with reports on what they have seen on the other side. However, the young volunteers are unprepared for what lies beyond.

Nothing can be brought back from the other side and trial and error has already determined that a person can only be on the other side of a door for twelve minutes before they begin to suffer psychosis. This is because it soon becomes impossible to tell what and who may be real and what is a hallucination. We follow three volunteers, a young couple Becky (Lina Esco) and Vince (Josh Peck), and their colleague Patrick (Dugan O'Neal) on their unnerving journey.

Because of the dream-like nature of ‘other side’ the Knockers segment is the most surreal, ‘trippy’ and intriguing. Soon the viewer also becomes entangled in the shifts in reality. The line between what is real and what is illusion becomes increasingly blurred.

Further information comes in the third short entitled Lamaj. This segment centres on a gentle scientist named Jamal (Kyp Malone from the band ‘TV on the Radio’), who lives in seclusion in a makeshift cabin in the woods and secretly conducts his own research on a portal that has appeared in the forest. One day his work pays off and he finds a way to communicate with the alien intelligence behind the door.

Realising the importance of his breakthrough, he invites another scientist to his cabin to share the excitement. She is a former colleague and an old flame. Unfortunately, she also brings along her current boyfriend, a civilian who has no appreciation of scientific exploration or the risks in making new discoveries. As the two scientists enthusiastically discuss the possibilities, he moves aside to call the authorities.

Holding the segments together is a recurrent audio broadcast from an internet talk show host calling himself Martin Midnight (David Hemphill) who specializes in examining ‘weird’ phenomena. In an epilogue we see Midnight broadcasting his show with a guest who gives him more insight regarding the doors than he bargains for.

Like any anthology, Portal is only intermittently successful. Sometimes it can be a little slow and frustrating, but it still works often enough in making the scenario intriguing and suggesting ideas which provide food for thought.

Overall, Portal should be commended in its ambition as it is visually impressive and embraces an unconventional method to tell its story and to convey big ideas, all on a minimal budget. While it may not always be altogether successful, it’s still a worthwhile experiment that is worth a look for dedicated fans of sci-fi.