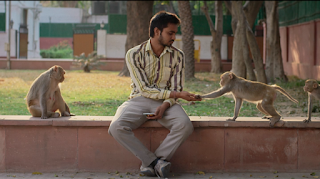 Channel 4’s annual Indian film season returns next Monday, 24th May, with eight films over four weeks that represent a cross-section of the best contemporary and classic Indian cinema...

This year’s season spans drama, thriller, social realism, independent and mainstream Indian cinema, exploring class, racial, political and gender divide. Beginning with a tribute to celebrated Bengali filmmaker Satyajit Ray to mark his birth centenary, Film4 channel will show two of his best loved features: MAHANAGAR (THE BIG CITY) and CHARULATA (THE LONELY WIFE). The remaining six films, all network premieres, will screen on Channel 4, and the entire season will be available for catch up on All 4, alongside an exclusive filmed introduction contextualising the featured films from season consultant, and this year's curator, Nasreen Kabir.
Born in India, Nasreen Munni Kabir lives in London and has made several TV series for Channel 4 on Hindi cinema, in addition to the two-part documentary: The Inner/Outer World of Shah Rukh Khan. She has curated major Indian film festivals in the 1980s at the Pompidou Centre in Paris and is author of 18 books on Hindi film, including “Guru Dutt - a life in cinema,” “Lata Mangeshkar in her own voice,” “In the Company of a Poet: Gulzar” and “Conversations with Waheeda Rehman”. Nasreen works as Channel 4’s consultant on Indian cinema, curating their annual Indian film season since 1982. She is former governor on the board of the BFI (2001-2007)
2021 season details

The season launches on Monday 24th May on Film4 channel with MAHANAGAR (THE BIG CITY, 1963), a tale of a family struggling to survive in Calcutta. Modest bank employee Subrata barely manages to make ends meet for his family. Realizing the financial pressure he is under, his wife Arati (Madhabi Mukherjee) takes a job selling knitting machines. Her transformation into an independent working woman upsets Arati’s traditional father-in-law. However, after Subrata loses his job, the whole family is forced to accept her as sole breadwinner.

Actress Madhabi Mukherjee returns in another story centred on a strong central female character in CHARULATA (THE LONELY WIFE, 1964), a tale of suppressed emotions in 19th century Bengal. Mukherjee plays the childless, beautiful wife of Bhupati (Sailen Mukherjee), who lives a privileged but lonely life. When Bhupati’s young cousin Amal (Soumitra Chatterjee) comes to visit, Charulata finds a delightful and enchanting companion in him, sharing an interest in poetry and literature. Soon her feelings for him change, disturbingly, from friendship into love.

In recent years independent cinema, made in several regional languages, has become a significant rival to commercial cinema in India. Anubhav Sinha’s THAPPAD (THE SLAP, 2020) is the first of four recent indies that demonstrate the diversity of the sector and its approach to subjects new for Indian film. Reflecting the #MeToo movement and questioning the role of the modern woman in India, Thappad is a Delhi-set story about a woman fighting for her rights after a single act of domestic abuse disrupts her seemingly ideal and privileged family life. Unable to ‘move on’ as everyone around her advises her, Amrita decides to take a stand against her husband with the help of a high-flying lawyer.

Also set in Delhi, EEB ALLAY OOO! (2019) from first-time director Prateek Vats highlights the plight of migrant unskilled workers. The film follows a young man employed as a ‘monkey chaser’ – contracted to keep the increasingly fearless hordes of primates off the government buildings of New Delhi. Likened to a Ken Loach film in the way it charts the struggle of its underclass protagonist, the film is a surreal, unexpected story, taking both a satirical and entertaining look at contemporary India.

Set in the alleys of the sprawling Bara Bazaar marketplace in Shillong, Meghalaya’s capital in North-East India, debut director Pradip Kurbah’s MARKET (IEWDUH, 2019) tells the story of a host of characters on the margins of society. Former drug addict Hep struggles to get his life back on course; elderly Lamare is fighting the onset of dementia; and housewife Priya is a victim of domestic violence. Connecting these narratives is eternal optimist and lovelorn dreamer Mike who looks after the market’s public toilets and finds himself intimately caught up in the lives of those around him. The film is a keenly observed tale of friendship and compassion set in a part of India we rarely see on screen.

The last of our selection of indies, Prithvi Konanur’s PINKI ELLI? (WHERE IS PINKI?, 2020) is a tense thriller set in Bangalore which begins with every parent’s worst nightmare. Young working mother Bindu returns home unexpectedly from the office to find her eight-month-old daughter Pinki and the maid who is meant to be looking after her have both gone missing. Bindu and her estranged husband set off on a frantic quest to find their daughter, but every time they seem to be getting close, Pinki is gone again.

For fans of commercial cinema, GOOD NEWWZ (2019) is a hit comedy-drama from first-time director Raj Mehta, following two mismatched couples’ collision when they set out to have children via IVF – a subject not often featured in Bollywood. Varun (Akshay Kumar) and Deepti (Kareena Kapoor) - a successful car-room CEO and a celebrity journalist – are desperate to have children. They sign up to a fertility clinic to help them conceive but a few days later are shocked to find out there’s been a mix up: Varun’s sperm has been given to a woman called Monika (Kiara Advani), whilst Monika’s husband Honey (Punjabi superstar Diljit Dosanjh) has fertilised Deepti’s egg. A star-studded, light-hearted movie with a modern script and humour.

The season ends with an all-time favourite, the original Tamil version of acclaimed director Mani Ratnam’s BOMBAY (1995) which continues to resonate as a heartfelt plea for religious tolerance in India. Journalist Shekhar (Arvind Swami) falls for a shy Muslim girl, Shaila (Manisha Koirala) while visiting his hometown on the coast. However when their fathers – an orthodox Hindu and devout Muslim - find out about the lovers, the two men clash, forbidding their children to marry. Featuring great performances, and one of the bestselling soundtracks of all time in Indian cinema by A.R. Rahman.