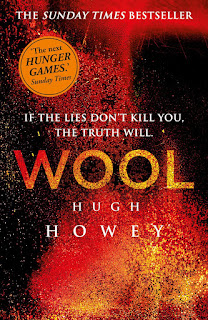 Apple TV+ has announced a series order for Wool, a world-building drama series based on Hugh Howey's New York Times bestselling trilogy of dystopian novels...
Wool is set in a ruined and toxic future where a community exists in a giant silo underground, hundreds of storeys deep. There, men and women live in a society full of regulations they believe are meant to protect them.  Rebecca Ferguson (Dune, Mission: Impossible films) will star as 'Juliette,' an independent and hardworking engineer.
Wool will be written by Emmy-nominated screenwriter Graham Yost (Band of Brothers, Justified) and directed by Academy Award nominee Morten Tyldum (Defending Jacob, The Imitation Game).
The series is executive produced by Ferguson, Yost and Tyldum, alongside author Hugh Howey. Remi Aubuchon, Nina Jack and Ingrid Escajeda will also serve as executive producers on the drama, produced by AMC Studios.
Our own Nate McKenzie mentioned Hugh Howey's novel Wool as a favourite in his Apocalypse Day Booklist a few years back, saying:
"Wool was originally a stand-alone story, but eventually stretched into the Silo Series. It is one of the most unique takes for an end of the world book that I've ever encountered.

"Imagine living in a 144-story building with hundreds of other people, completely shut off from the outside world due to an apocalyptic event that turned the air toxic. Now imagine that you can't even see outside save for one monitor in a communal area. Now, imagine that is the case because this building is underground. That is the world of Wool.

"Howey creates a world in Wool that is so tangible, so believable, that I almost believe the book is the true fate of our world and he is a time-traveller sent back to guide us away from that end. You more than fall in love with the characters, you empathize with them, smelling what they smell, feeling the burn in your legs as they run up and down the spiraling staircase, and gasp for air when they breathe deeply. Others, you hope suffocate in horrible ways. Sometimes you get what you wish for; other times, you don't."
[Let's hope he gets what he wishes for with this new TV series then - Ed]
Image - Amazon