Audio - The Box of Delights 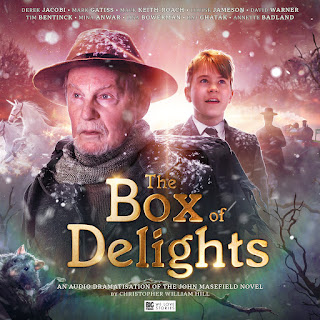 Prepare to go swift (and unseasonable) and join the adventure of a lifetime, as Big Finish Classics: The Box of Delights is released today...

Opening just in time for the holidays, this brand-new full-cast audio adaptation is based on the beloved novel by John Masefield, and follows the classic fantasy adventure about schoolboy Kay Harker who is entrusted with a magical box. He soon realizes he has the ability to time travel and shapeshift, as he is thrown into a race against time to protect the box from an evil magician and to save Christmas.

Returning home for Christmas, young Kay Harker meets a strange, old Punch and Judy man and finds himself thrown deeper and deeper into a thrilling world of magic and peril. Tumbling through time, he's pursued by gangster magicians, piratical rats and sinister forces that will stop at nothing to destroy Christmas. The wolves are running... Will Kay be able to stay ahead?

Writer Christopher William Hill said: “I’ve previously adapted The Midnight Folk, the prequel to The Box of Delights, for BBC Radio so coming to this was a real pleasure. Like many other people, I loved the television version of The Box of Delights so I was delighted to be asked to be involved with this audio adaptation.”

Director Barnaby Edwards added: “It is beyond exciting. As a massive fan of The Box of Delights, I am doing everything in my power to get it right and so is everyone involved in. We have the luxury of more running time than any other adaptation and we’ve used it to flesh out Masefield’s world. That goes not just for the dialogue, characters, plot and action – it applies equally to the soundscape. This sounds like a movie, it’s so immersive. And the music. Oh the music! The wolves are running!”

Big Finish Classics: The Box of Delights is now available as a limited edition 6-CD box set (priced at £34.99) or digital download (at £29.99), at www.bigfinish.com.

Please note the box set edition is limited to 1,000 copies only.

Big Finish is currently operating a digital-first release schedule. The mail-out of collector’s edition CDs may be delayed due to factors beyond our control, but all purchases of this release unlock a digital copy that can be immediately downloaded or played on the Big Finish app from the release date.
Image & info - Big Finish
Email ThisBlogThis!Share to TwitterShare to Facebook