Book - The Vanishing Half 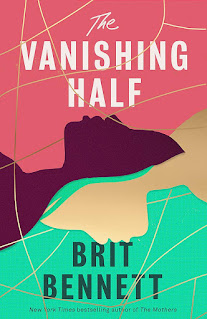 Tony Cross is reading all the books on the Women’s Prize for Fiction shortlist ahead of this year's awards in September. Here are his thoughts on The Vanishing Half by Brit Bennett...
The one advantage to reading books that are on literary prize lists is that they are rarely bad books. Sometimes they are a little overwritten. Occasionally they get carried away with themselves, but most of them are good and some of them are fantastic.

This is the fifth book on the Women's Fiction Prize of 2021 I have read so far and not one of them has been a dud. The Vanishing Half is the story of twin sisters - Stella and Desiree Vignes. They live in a small town, called Mallard, which is home to families of light-skinned African Americans. It was founded to make a home for them. Stella and Desiree, for reasons of their own, flee the town in August 1954. The book begins with Desiree's return with her dark-skinned child, Jude, in 1968. Stella walked out on Desiree when they were in New Orleans, and no one knows where she is.

The book tells their stories, and that of their daughters, forwards and backwards from Desiree's return. There are elements of the novel that reminded me of Nella Larsen's 'Passing'. The questions of identity. Even the light-skinned residents of Mallard are not safe from the murderous activities of white neighbours but in little humiliations the fact that it does not matter how light your skin to white people you are still black. But, even in Mallard, Jude's ultra-blackness is a cause for insults and isolation. The perception that the darker your skin the less likely you are to be trusted.

Now, I am writing this as a white Englishman. I have never experienced any of the petty and large humiliations that come from being a black person in a white-dominated world. Books like this can make me open my eyes and heart but the question is...what then. This book and Yaa Gyasi's 'Homegoing' do a fine job of emphasising the continuity of prejudice and the different kinds of racism. Not all racism is rednecks and the n-word. There is a subtler kind. The kind that boos taking the knee or claims that institutional racism is not a thing even in the face of overwhelming evidence. The kind that uses Critical Race Theory as a euphemism to cover older and less subtle forms of prejudice.

In 'Homegoing' there is a moment when Sonny, who is then working for the Housing section of the NAACP is interviewing a family about their disgraceful housing conditions and one of them says to him: "You can't do a single thing, can you?" And since I finished reading that book and on reading this one that line has been hammering away at me. What can be done? What can I do?

In an essay in the Guardian (20 March 2021) Yaa Gyasi writes about how she feels about white people using her work post-George Floyd's murder: "It's wrenching to know that the occasion for the renewed interest in your work is the murders of black people and the subsequent "listening and learning" of white people." I do not know if Brit Bennett feels the same way about how white people respond to her work. I do know that this book moved me because, whilst it is about a specific experience, if you have empathy, you can feel how the characters in this novel feel.

I used to think, when I was a much younger man, that families are families. That the only difference between us was money and the stuff we own. It is not true. Your lived experience changes how you interact with the world, who you are and who you want to be. The question is whether society is willing to let you be who you want to be.

Now I fear I am making this all sound terrible worthy and dull, which does Brit Bennett a disservice. This is a fine book. The craft and art are equal to the task of telling an interesting story. This is a book of strong characters whose feelings Brit Bennett helps you to understand. Real people seem to inhabit this story. It is paced well. I found it hard to put down. You should read it.
Follow Tony on Twitter at @Lokster71
The Women's Prize for Fiction was inspired by the Booker Prize of 1991, when none of the six shortlisted books was by a woman, despite some 60% of novels published that year being by female authors. Twenty-five years later, the Women’s Prize for Fiction is firmly established, is respected throughout the world and has made a major impact on the literary landscape in the UK and beyond.
This year's shortlist is:
The Vanishing Half by Brit Bennett (Dialogue Books) - Find on Amazon
Piranesi by Susanna Clarke (Bloomsbury Publishing) - Find on Amazon
Unsettled Ground by Claire Fuller (Fig Tree) - Find on Amazon
Transcendent Kingdom by Yaa Gyasi (Viking Books) - Find on Amazon
How The One-Armed Sister Sweeps Her House by Cherie Jones (Tinder Press) - Find on Amazon
No One is Talking About This by Patricia Lockwood (Bloomsbury Circus) - Find on Amazon
The winner will be announced at an Awards Ceremony in London on Wednesday 8th September.
Image - Amazon
Email ThisBlogThis!Share to TwitterShare to Facebook