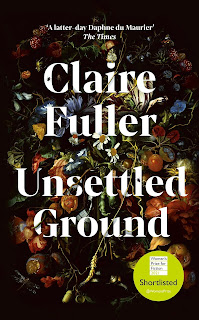 Tony Cross is reading all the books on the Women’s Prize for Fiction shortlist ahead of this year's awards in September. Here are his thoughts on Unsettled Ground by Claire Fuller...

Unsettled Ground begins with a death, that of Dot. It then tells how the fall out from that death impacts on the Jeanie and Julius, Dot’s two middle-aged children who had still been sharing the cottage with their mother.

It is a story of the rural poor, a group of people often forgotten in modern Britain. As each new revelation and each new struggle buffets against Jeanie and Julius you start to wonder if they are going to break, but if nothing else what this story does is illustrate Jeanie’s strength. Even as it looks like everything is lost. Even as every additional revelation shakes her view of the world.

As with many reviews there is only so much you can say about the plot without spoiling it. This is a novel that rewards blissful ignorance when you begin it.

Jeanie and Julius are not really part of the modern world. Jeanie has no mobile phone, for example. Jeanie’s interactions with the modern world, a world of things, makes you realise how much we have got used to being surrounded by gadgets and objects.

There are good and bad intentioned people in this novel, but regardless of that all the people feel real. You care about Jeanie and Julius. You understand their frustrations. You feel their confusion and pain. Other characters in the book also have a solidity to them. This is a book of three-dimensional people living lives that make sense.

Fuller is a sensitive writer. This is not an easy book to read, but I think is pays the investment of time. I worried for Jeanie and Julius. I feared how their story would end. I feared they might make a terrible mistake. Fuller is also a great writer for the senses: the smells, the tastes, and the textures. This is Fuller’s fourth novel, but the first of hers that I have read, and Unsettled Ground makes me want to read more.

I often say a book is not an easy read and my favourite books often are not. Sometimes the difficulty is stylistic, but that is not the case here. There is nothing opaque about Claire Fuller’s prose. The difficulty of this book is how it makes you feel. The journey – a word I have grown to dislike as it has been mangled by reality television into almost meaninglessness – is a tough one. But it rewards the taking.