Book - How the One-Armed Sister Sweeps Her House 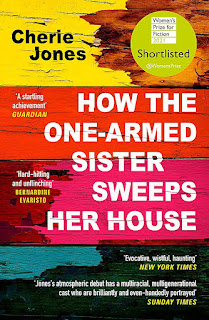 Tony Cross is reading all the books on the Women’s Prize for Fiction shortlist ahead of this year's awards in September. Here are his thoughts on How the One-Armed Sister Sweeps Her House by Cherie Jones...
How the One-Armed Sister Sweeps Her House is set in Barbados, but this is not the Barbados that we think of as the holiday paradise that the Tourist Board would like us to think of it as. There is poverty, violence, and corruption. There are violent marriages. Bad marriages. Indeed, I am not sure any marriage mentioned in this book is happy. To snatch a chunk of text from the book itself that explains that for Lala, the lead character, and her family: ".... a marriage meant a murder.”

The book begins with a murder. A burglary goes wrong, a white man dies. The killer, Adan, is married to Lala. Lala is the main character of the book and Adan is a violent man. Lala knows that Adan is the killer, but she tries to stay with him. Then things get worse. For almost every character in the book. This is like a rollercoaster of worse and worse situations and event. Murder, rape, child abuse, the death of a child...it is so bleak. But it feels like this is a lived experience for some women. Some people. An experience that, thankfully, I have never had to live through.

Yet, having said it is bleak, there is the glimmer of hope in the ending. I do not want to spoil it, so I will not say much. Perhaps escape is possible. But what is the cost of that escape.

A question this book does raise is where can women find freedom for themselves? Their bodies are claimed by men. Either directly through relationships (and yes, that is in the best relationships more of a sharing rather than an occupation) or indirectly through politicians who talk about freedom in airy ways but dictate to women their bodily rights. There is a line in the book that puts Lala’s relationship with Adan into perspective. It is a line that should perhaps be carved in stone somewhere: “You understand that if you must learn to love a man, he is probably not the man you should be loving.”

Jones's writing is vivid and imaginative. It sticks with you, which is why it is such a hard read. If it were a badly written book, it would be an easier read but it is too good to not affect you. It reminded me of the film "Nil by Mouth" in terms of my reaction. I am glad I read it, but I would not necessarily want to read it again. Like I am glad I saw “Nil by Mouth”, but I have never been in a rush to see it again. But perhaps I should see it again and perhaps I should read “How the One-Armed Sister Sweeps Her House” a second time. Second readings often open insights you missed the first time around.

I think it will be a while before I do though.
Follow Tony on Twitter at @Lokster71
How The One-Armed Sister Sweeps Her House by Cherie Jones is released in paperback on 1st July
The Women's Prize for Fiction was inspired by the Booker Prize of 1991, when none of the six shortlisted books was by a woman, despite some 60% of novels published that year being by female authors. Twenty-five years later, the Women’s Prize for Fiction is firmly established, is respected throughout the world and has made a major impact on the literary landscape in the UK and beyond.
This year's shortlist is:
The Vanishing Half by Brit Bennet (Dialogue Books) - Find on Amazon
Piranesi by Susanna Clarke (Bloomsbury Publishing) - Find on Amazon
Unsettled Ground by Claire Fuller (Fig Tree) - Find on Amazon
Transcendent Kingdom by Yaa Gyasi (Viking Books) - Find on Amazon
How The One-Armed Sister Sweeps Her House by Cherie Jones (Tinder Press) - Find on Amazon
No One is Talking About This by Patricia Lockwood (Bloomsbury Circus) - Find on Amazon
The winner will be announced at an Awards Ceremony in London on Wednesday 8th September.
Image - Amazon
Email ThisBlogThis!Share to TwitterShare to Facebook