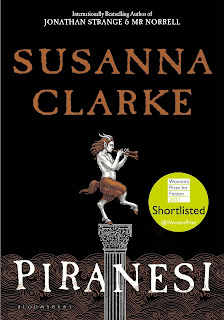 Tony Cross is reading all the books on the Women’s Prize for Fiction shortlist ahead of this year's awards in September. Here are his thoughts on Piranesi by Susanna Clarke...


I think this book will end up being one of my favourite novels. It is beautiful both as craft and art.

I found myself as swallowed up by the world it was set in as Piranesi himself.

As the book went on, I found myself trying to work out what was happening and why. In some ways I felt like a detective trying to find the solution to a puzzle. Trying to piece together what had and was happening from clues that might not even be clues.

The way Clarke gradually pulls all the strands of the story together is almost magical. Indeed, I was reminded that 'spell' has its etymological origins in words about storytelling. That a spell is a charm or a verse. Piranesi is, in that sense, genuinely magical.

I do not want to spoil this book for other readers, so I am going to avoid talking much about the plot. Piranesi, the central character, is someone you want to be friends with though and it helps that he is the one telling it. There are other characters, but we only see them through Piranesi's eyes.

This is a book that, if you let it, will swallow you up. The book talks about the idea that knowledge operates like water. Over time it seeps into the earth, it cuts outs caves and spaces and that is the space where we are taken by art (in its broadest sense). Perhaps I am being overly pretentious and analytical. Perhaps I am stating the obvious. Who knows? It almost felt like a Philip K Dick idea written by Michael Moorcock. Again, perhaps I am reaching. Because I am struggling to explain why I like it so much.

I have said before that it is often harder to write about things you have enjoyed than things you dislike. There is a kind of fluency that flows from dislike. It is easier to be scathing than encouraging. Not that Susanna Clarke needs encouraging. She is already a successful writer. I found I could not put this book down but equally I did not want to finish it. I spent as much time with Piranesi as I could. An unputdownable book that I had to force myself to put down.

What more is there to say? I do not want to spoil it. I want you to experience it for yourselves and then come and tell me what you think about it.

Read it.
Follow Tony on Twitter at @Lokster71
The Women's Prize for Fiction was inspired by the Booker Prize of 1991, when none of the six shortlisted books was by a woman, despite some 60% of novels published that year being by female authors. Twenty-five years later, the Women’s Prize for Fiction is firmly established, is respected throughout the world and has made a major impact on the literary landscape in the UK and beyond.
This year's shortlist is:
The Vanishing Half by Brit Bennet (Dialogue Books) - Find on Amazon
Piranesi by Susanna Clarke (Bloomsbury Publishing) - Find on Amazon
Unsettled Ground by Claire Fuller (Fig Tree) - Find on Amazon
Transcendent Kingdom by Yaa Gyasi (Viking Books) - Find on Amazon
How The One-Armed Sister Sweeps Her House by Cherie Jones (Tinder Press) - Find on Amazon
No One is Talking About This by Patricia Lockwood (Bloomsbury Circus) - Find on Amazon
The winner will be announced at an Awards Ceremony in London on Wednesday 8th September.
Image - Amazon
Email ThisBlogThis!Share to TwitterShare to Facebook