Film - My Heart Can’t Beat Unless You Tell It To 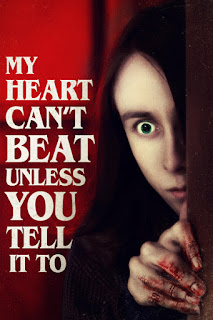 Coming to Digital Download soon thanks to Lightbulb Film Distribution, Ren Zelen watched My Heart Can’t Beat Unless You Tell It To...

Dwight (Patrick Fugit) and Jessie (Ingrid Sophie Schram) are caretakers to their younger brother Thomas (Owen Campbell) who is physically weak and prone to seizures. Thomas can’t walk far independently, often crawling or leaning on walls for support. However, we also learn that he is severely allergic to daylight and becomes much sicker unless he is fed blood on a regular basis.

The V-word is never mentioned and nothing about Thomas’s frail condition resembles the conventional horror-movie vampire trope. He is sweet natured, but fragile, and quickly becomes ill and haggard if not fed. He is too weak to get his sustenance for himself, so he is dependent on his two healthy siblings get it for him.

This they must do by picking up strangers, usually vagrants or illegal immigrants, luring them to the house with promises of shelter or help, then dispatching them and draining their blood. The corpses are buried in the backyard, their few possessions then sold to a thrift shop.

Brother Dwight, torn between the demands of his family and the pangs of his conscience, is reaching the end of his tether with this ugly cycle of killing for blood, but he loves his little brother. Meanwhile, sister Jessie, sensing his growing revulsion, piles on the emotional blackmail to bolster his loyalty to the family.

Desperate for human contact outside his suffocating home life, Dwight is secretly seeing a prostitute (Katie Preston). He can’t help fantasizing about running away with her to start a new life. Unfortunately, after seeing the woman solicit customers outside the diner where she is a waitress, Jessie targets her as the next victim to provide young Thomas with a blood meal.

When Jessie discovers Dwight’s link to the woman, she sees it as a betrayal and tries to hold the family unit together by reiterating a rigid system of rules. But, along with Dwight’s faltering allegiance, Thomas too begins to show signs of rebellion, insisting on his desire to interact with the outside world and have ‘friends’ outside the family, although he knows nothing about how normal society operates.

The siblings manage to maintain their murderous activities because of their social isolation. How Thomas’s condition came about or what happened to the siblings’ parents is never explained. We are left to wonder if they might have been the first victims or sacrifices to Thomas’s survival.

Thomas’s naivete regarding regular life, and his impossible desire for some kind of normality, threatens to disturb their seclusion and to attract disaster. He defies sister Jessie’s restrictions and attempts contact with the outside world. On hearing voices in the street outside, he sends a note written on the back of a paper plane flying into the daylight, hoping someone might find it. Someone does. 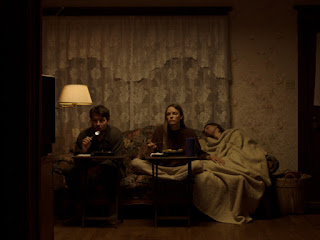 With My Heart Can’t Beat Unless You Tell It To, Colombian-American writer\director Jonathan Cuartas crafts a melancholy first feature, offering a thoughtful exploration of family isolation and co-dependency. He chooses to downplay the horror and instead use the fantastical elements to illustrate psychological conflict and familial disintegration.

As it places more emphasis on domestic stress rather than conventional horror scares, Jonathan Cuartas’ feature may be too ’realistic’ and low-key for mainstream and franchise horror fans, but the film’s strong performances and psychological conflicts still create tension and imbue the film with a desperate pathos.

It’s testament to Cuartas’ screenplay and Patrick Fugit’s quiet, affecting performance that we remain relatively sympathetic to his character Dwight who is, in effect, a reluctant serial killer. Owen Campbell succeeds in makes the ailing Thomas both piteous and strange, while Ingrid Sophie Schram’s Jessie becomes increasingly cold in her determination to hold the family together, even if it means turning herself into more of a monster than her younger brother.

The family’s confining and repetitive existence is echoed in the sparse, dark interiors, highlighting Thomas’s prison of illness and augmented by Andrew Rease Shaw’s gloomy score. The indoor claustrophobia is placed in stark contrast to the gorgeous, outdoor vistas of Utah’s lakes and mountains.

Although a little too leisurely in its pacing, on the whole, My Heart Can’t Beat Unless You Tell It To offers an absorbing and heartfelt domestic drama, punctuated by moments of wince-inducing tension.

My Heart Can’t Beat Unless You Tell It To will be released on Digital Download from June 28th thanks to Lightbulb Film Distribution.