Book - No One Is Talking About This 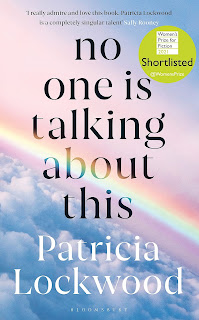 Tony Cross is reading all the books on the Women’s Prize for Fiction shortlist ahead of this year's awards in September. Here are his thoughts on No One Is Talking About This by Patricia Lockwood...

I am on a roll of reading excellent books. Perhaps this is because I have been focused on book prize shortlists. This one, the first novel by poet Patricia Lockwood, is shortlisted for the Women's Prize 2021.

I must confess when I started reading this book, I thought I was going to hate it. Yet it turned into something else. Something wonderful. Something heart breaking. Reading the acknowledgements at the end this is a more personal story than it initially looked. And 'No One Is Talking About This'. Perhaps they might after they have finished this book.

Lockwood manages to write something that feels to me more like a long prose poem than a bog-standard novel. Although I wonder if I think that because I know Patricia Lockwood is a poet. I do not think so. I thought it felt like that before I did any research into Patricia Lockwood. Once a poet, always a poet? The bite-sized chunks of text - is anything ever longer than half-a-page? – do seem like the verses of a poem, although they are often meant to be the thoughts of the narrator in social media form.

The story is set in a sort of now, although with avoiding the most obvious contemporaneousness by using euphemisms for familiar things and people so that we do not get too hooked by our own personal feelings towards those people and things. There is a little distance. It looks, in the beginning, like it is going to be a cautionary tale about the perils of internet culture. Yet that is not what it is. It becomes a story about the real world and real experiences.

Also, it talks about big issues and concepts without lecturing or hectoring. The narrator, who initially I thought was going to be something of a cliché, turned out not to be that at all. Perhaps I was judging both the narrator and the author from the point of view as a grumpy old man whose formative years did not involve social media, blogs, or ‘content’. Perhaps I felt that a book that looked like it was going to focus on these things would have nothing to say that I wanted to hear. There is something refreshing about having your preconceptions shattered.

Lockwood manages to gradually pull you into the story and to care about the people in the story, even if your initial inclinations – like mine – are judgemental. Hopefully, none of you are quite as judgmental as me about the young people. By the end of the book, I was emotionally all in.

I cried. Twice. At the end.

A fantastic read.
Follow Tony on Twitter at @Lokster71
The Women's Prize for Fiction was inspired by the Booker Prize of 1991, when none of the six shortlisted books was by a woman, despite some 60% of novels published that year being by female authors. Twenty-five years later, the Women’s Prize for Fiction is firmly established, is respected throughout the world and has made a major impact on the literary landscape in the UK and beyond.
This year's shortlist is:
The Vanishing Half by Brit Bennet (Dialogue Books) - Find on Amazon
Piranesi by Susanna Clarke (Bloomsbury Publishing) - Find on Amazon
Unsettled Ground by Claire Fuller (Fig Tree) - Find on Amazon
Transcendent Kingdom by Yaa Gyasi (Viking Books) - Find on Amazon
How The One-Armed Sister Sweeps Her House by Cherie Jones (Tinder Press) - Find on Amazon
No One is Talking About This by Patricia Lockwood (Bloomsbury Circus) - Find on Amazon
The winner will be announced at an Awards Ceremony in London on Wednesday 8th September.
Image - Amazon
Email ThisBlogThis!Share to TwitterShare to Facebook