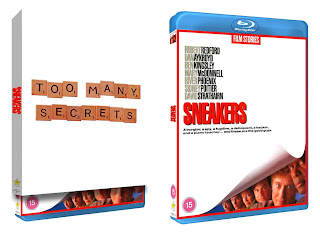 The 1992 hit film Sneakers comes back to Blu-ray with a brand new special edition on 28th June, marking the first release for Film Stories' new label. Here's a reminder of Steve Taylor-Bryant's review from a few years back ...

It's time to turn the spotlight onto my love of cryptography and government espionage in the form of Sneakers.

Martin Bishop is the head of a group of experts who specialise in testing security systems. When he is blackmailed by Government agents into stealing a top secret black box, the team find themselves embroiled in a game of danger and intrigue. After they recover the box, they discover that it has the capability to decode all existing encryption systems around the world, and that the agents who hired them didn't work for the Government after all...

I knew a little of espionage before watching Sneakers, being a child of The Cold War period how could you not, but gathered in my mind that governments spying on everyone happened to a lesser extreme than it actually does. I certainly believed that spying on your own people was not a huge part of life but more small isolated incidents shown up when stories happened like The Pentagon Papers (military analyst Daniel Ellsberg photocopied the documents about the U.S. involvement in Vietnam and leaked them to the New York Times) and the Watergate controversy (covered in another fantastic film starring Robert Redford – All The President’s Men) and in this regard Sneakers is hugely ahead of its time. It’s incredible to think Sneakers was covering in depth events in 1992 that the world wouldn’t become accustomed to until Wikileaks nearly 18 years later.

More than just being ahead of its time though, Sneakers was a great spy film and a comedy that was both smart and performed incredibly well. The injoking between agencies and Redford’s team, the conspiracy nods – especially from Mother, and the way that no one really knew what the other people involved were up to was a delight to see. The power of Sneakers is in the casting. There is no point having an incredible vision on paper, and a director that knows exactly what he wants if you don’t have an ensemble to light up the tale on the big screen.

Redford plays Martin ‘Marty’ Bishop who runs a select team of personnel that test out security for establishments like banks. Marty though used to be a sneaker, hacking into government sites using his college equipment to redistribute funding from corrupt politicians to more liberal causes but he had left that life behind him after his friend Cosmo had been arrested whilst he was out buying pizza. Marty’s team of security experts is a collection of the most inspiring yet unorthodox men you could ever find and to a man these are some of the best performances these particular actors have brought to fruition. Donald Crease is an ex-C.I.A. Agent and beautifully played with the right amount of slickness by the wonderful Sidney Poitier. David Strathairn is another in my list of favourite actors, due mainly to his performance in Good Night and Good Luck, and he plays a phone specialist, Irwin ‘Whistler’ Emery, whose hearing is spot on but is as blind as a bat. The much missed River Phoenix brings youthful exuberance to the cast in the form of young genius Carl Arbogast but it is the conspiracy nut and technician of the team, Darren ‘Mother’ Roskow, played by Dan Ackroyd that steals the show. Ackroyd is annoying man. He is often verging on pure talent with The Blues Brothers and Ghostbusters but just when you think he has the formula cracked you get an unnecessary and unwanted Blues Brothers sequel or Spies Like Us. I don’t think he will ever be as good though as he is as Mother in this film. The craziness he portrays so well is clearly evident but his comic timing is as spot on as anything great he has done before.


On the opposition to Marty and his team are various agents and characters that include Timothy Busfield as Dick Gordon who is on the end of many barbs from the wisecracking good guys, and Gotham’s own Donal Logue who is really good as Dr. Gunter Janek, but it is the main baddie that intrigues the most. Marty had thought Cosmo had died in prison but he is very much alive and well and secretly running everything. As was the fashion then (and probably still is) it was the United Kingdom that supplied the actor to play a villain and Ben Kingsley is one of the best actors we have ever produced. His portrayal of Cosmo was not up there with Ghandi and the like but it was still flawless and worked well.

Does Sneakers hold up more than two decades later? Sort of. The technology used by the characters is now quite dated but in a regular household in 1992 it was as futuristic and stunning as you can get. The tech aside, the rest of the film is still brilliant. To assemble writers and a cast like this to do something similar now could never happen due to budgets. Sneakers was made relatively cheaply with a budget of around $30m, which wouldn’t hire you an actor of Redford’s calibre these days let alone a Poitier, Pheonix, Strathairn, Ackroyd and Kingsley. It has also been a long time since the Cold War and the spy adventures we all loved then, so I am not even sure that the story would have any relevance today, plus it is also relatively action and C.G.I free so I doubt the watered down audiences of this generation would sit and watch it anyway. They really don’t get clever dialogue as a storytelling format any more.

Sneakers will be available on Blu-ray from 28th June exclusively on Film Stories and is available to pre-order now.
FIRST EDITION (LIMITED TO 1,000) INCLUDES SLIPCASE