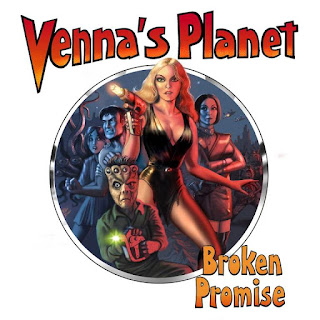 Casting has been announced for the forthcoming audio dramatisation of Robin Evans’ graphic novel and comedy space opera VENNA’S PLANET, produced for AUK Studios by multi-award-winning producer B7 Media...
Press Release
The all-star cast includes cult Hammer Horror and Bond actress Caroline Munro as Venna’s nemesis ‘Jylda’ and former Blake’s 7 star, Sally Knyvette, who plays Venna’s senior officer and jealous admirer, Countess Galo. “I beamed into my dear departed mother who was a bit like a Countess,” says Knyvette. “(The Countess) is quite sensual and she’s very commanding! The writing’s good and I like the humour too.”

Venna herself is played by popular video game voice actor Amelia Tyler who is no stranger to battling bizarre creatures on strange and curious planets. Having previously voiced iconic characters in major franchises including, Malady in Divinity: Original Sin, as Nyrissa in Pathfinder: Kingmaker and as the narrator in Baldur’s Gate III. Handy with a space pistol, Venna is an intergalactic heroine who is always willing to fight her corner, a fierce protector of her friends, it wasn’t a huge jump for Amelia to leap into Venna’s intergalactic boots.

Amelia Tyler instantly identified with Venna: “We both have a very can-do attitude, throwing ourselves into all manner of scrapes with reckless enthusiasm and making up solutions on the fly, neither of us take any sh*t and are fiercely protective of the people we care about… but the biggest similarity is our sense of humour. Whether she’s in a shootout, getting attacked by a horrifying alien creature or covered in some kind of disgusting goo, Venna always has time for a wry quip and I’m very much the same.”

“We’re also both bisexual and it’s been great to play a bi character whose sexuality is normalised rather than fetishised or made the entirety of her character. Venna’s in love with a woman, but that’s only a tiny part of her and her story. She’s also very feminine in appearance and the adventures we go on with her are full of hilarious eyebrow wiggles and knowing winks, but I think listeners will be pleasantly surprised to meet a female lead who doesn’t fit the traditional ‘sci-fi hottie’ stereotype,” adds Tyler.

Misha Crosby says: “It’s genuinely been a joy to be a part of Venna. The writing is so much fun; the production and cast have had me laughing at a time when I think most people could really do with it. Radio’s a wonderful thing - with Clayton it’s the first time I’ve been able to get chiselled abs without having to actually work out.” 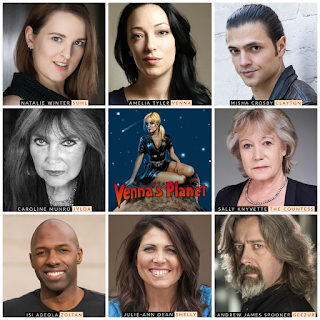 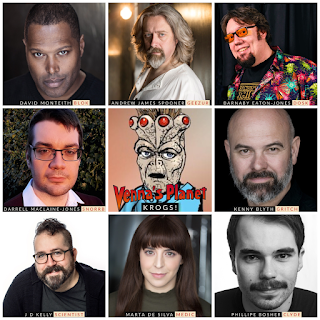 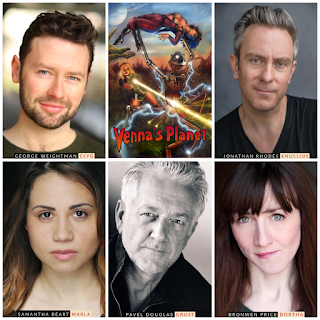 Combining knowing and camp space opera like Flash Gordon, Barbarella and Buck Rogers with a daft and very British sense of humour in the style of The Hitch-Hiker’s Guide to the Galaxy and Monty Python, Venna’s Planet is a much-needed tonic for our times and a reminder not to take ourselves too seriously. Featuring bureaucratic, admin-loving Krogs, insects that explode as a self-defence mechanism, flying paragravs, falling droners and self-heating trousers, Venna tackles them all. Well... maybe not the trousers.

Venna’s Planet is produced by Helen Quigley (The Space Race & Greenborne) and directed by Andrew Mark Sewell (I Robot, Blake’s 7, Dan Dare). Venna’s Planet is a ten-part audio series created by B7 Media on behalf of AUK, and is part of AUK’s expansive investment program with multiple international creative companies and talents, across multiple media formats.

Paul Andrews, CEO of AUK and executive producer of Venna’s Planet said, “Having worked with B7 Media for many years, and with their outstanding record in Sci-Fi audio drama creation speaking for itself, I had no hesitation in giving free creative control to Andrew and Helen to bring Robin’s graphic novels to life, and we are looking forward to it spearheading the many exciting releases from AUK already announced as well as many more pending, as part of a large expansion of AUK funded content creation throughout 2021 and beyond.”

To coincide with the first season audio release, AUK has also released volume three of the graphic novel series by Robin Evans, with a planned limited-edition volume of all three Venna’s Planet graphic novels released later in 2021.
Images & info - AUK
Email ThisBlogThis!Share to TwitterShare to Facebook