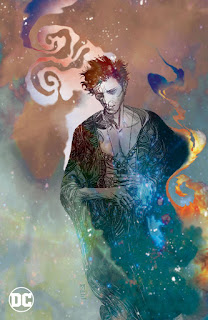 Here's an early look behind the scenes clip from the first ever screen adaptation of Netflix’s The Sandman, based on the DC comic book series from Neil Gaiman...
A rich blend of modern myth and dark fantasy in which contemporary fiction, historical drama and legend are seamlessly interwoven, The Sandman follows the people and places affected by Morpheus, the Dream King, as he mends the cosmic--and human--mistakes he's made during his vast existence.

Based on The Sandman comic book series created for DC by Neil Gaiman, the 10 (plus one!) episode series stars Tom Sturridge as Dream of the Endless, Gwendolyn Christie is Lucifer, Sanjeev Bhaskar and Asim Chaudhry are Cain and Abel, Charles Dance is Roderick Burgess, Vivienne Acheampong is Lucienne, and Boyd Holbrook is The Corinthian.