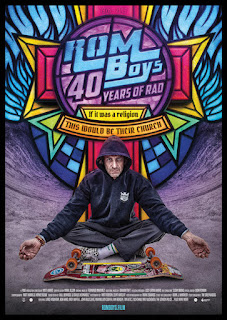 Pixelwork has announced that their critically acclaimed documentary Rom Boys: 40 Years of Rad will be screening on the opening night of the Romford Film Festival on 24th June. Watch the trailer...
Press Release

During this historic year for skateboarding and BMX, as the sports are set to make their debuts at the Tokyo Olympics, Pixelwork is thrilled to share the film with an audience via the big screen.

Shot in stunning 4K, the film centres around East London's legendary Rom skatepark and is the first feature-length documentary to look at the early British skateboarding and BMX scene from the late '70s & '80s.

Rom Boys features archive footage from the past 40 years and over 30 interviews with some of the worlds biggest names in skateboarding and BMX, including Gumball 3000 creator Maximillion Cooper & '80s skateboarding legend Lance Mountain.

Rom skatepark is one of the world’s oldest and most unique skateparks, but following a devastating fire, it’s financially on its knees. Meet the park’s middle age skaters, BMXers and street artists, who against all the odds, are fighting to keep the park alive for the next generation. Welcome to Britain’s Dogtown.

Following the film's big-screen launch at the Romford Film Festival Rom Boys: 40 Years of Rad will also be screening at Brighton Rocks in July.

Director Matt Harris is excited about the upcoming screening saying “Following a UK premiere at a drive-in screening at the park at the height of COVID, it’s going to be great to get to finally see the film in a real cinema setting and in the home town of the park itself. I know for a fact a load of Rom locals and regulars will be in attendance so we should be in for a lively Q&A after the screening."

The film is also available on all major digital download platforms