Documentary – On the Trail of Bigfoot: The Journey 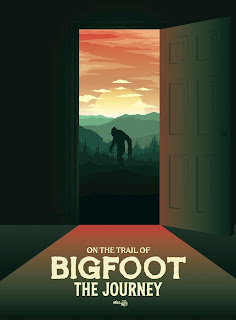 With the documentary available to stream from next week, Steve Taylor-Bryant followed in some very large footprints and watched On the Trail of Bigfoot: The Journey...

Following a wildly successful 2020 with the releases of Mark of the Bell Witch and The Mothman Legacy, Small Town Monsters has announced the release of their latest documentary, On the Trail of Bigfoot: The Journey. The Journey is the follow-up to the miniseries "On the Trail of Bigfoot", and cryptid documentarian Seth Breedlove from Wadsworth, OH leads the Small Town Monsters team deep into the Adirondacks on the hunt for Sasquatch.

Breedlove and his handpicked crew of adventurers and investigators headed to upstate New York for an intensive, adventure-filled week searching for Sasquatch. The team documented the trip, which included multiple days and nights in the forests around upstate New York and Western Massachusetts. Their trip was spent with Bigfoot researchers like Steve Kulls ("Monsterquest") and Paul Bartholomew (Finding Bigfoot, Beast of Whitehall) who led them on the search for their quarry.

I am incredibly open minded when it comes to phenomena that as yet cannot be confirmed or denied by science. I do not disbelieve alien abduction victims but I await evidence, I do not disbelieve Sasquatch witnesses, but again when something can be proved either way, I remain open to changing my mind and so I went into Small Town Monsters film with a little trepidation. I didn’t want a glossy and loud “you must believe, here look” piece of propaganda, I also didn’t want to watch anything that belittled or mocked those that do have a passionate belief but, within a few minutes, I realised I shouldn’t have worried as Seth Breedlove and his team present this film with no agenda. They just give you their experience over a five day adventure in the Adirondack National Park, allow you to meet some very interesting people, look at some evidence, and make up your own mind as to whether Bigfoot should be classed as real or mythology. Before I even touch on anything Bigfoot related though, I must congratulate Breedlove and his entire crew for a wonderfully crafted film. It is full of stunning beauty perfectly captured, a score reminiscent of a studio blockbuster, and some very sharp editing rare in documentaries these days that allows the hour and a half runtime to fly by in an informative and interesting way. 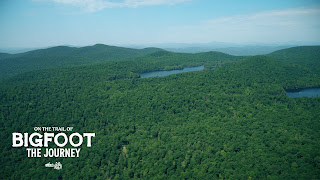 I try not to spoil films that I think deserve a large audience, and so I must be careful not give much away as to whether the team of adventurers get their own personal experience of a Sasquatch over their five day trip or not but, in those five days, what I did get was an appreciation for the sheer scale of the habitat we are talking about when it comes to where we think Bigfoot lives. With the dense forest, lakes and streams, and mountains that cover upstate New York, Vermont, and Western Massachusetts we are looking at millions of acres, a place perfect for an animal or person that does not want to be discovered to hide, but with the science of migration we learn about in the film we can also see why so many sightings may have occurred so close to populated areas. The investigators, professors, and witnesses interviewed within the documentary are all articulate in their passion and deserving of their screen time and the open mindedness of the films creators is wildly refreshing when it comes to a divisive and often vilified subject matter. You get to learn the history of the area and of the sightings that date back into 1700’s and involve a US president and a Vermont governor, and you get a great lesson in the camaraderie that likeminded individuals can garner when they come together in a passionate pursuit.

What I took most from the film, a film that starts after the outbreak of the worldwide Covid-19 pandemic, is just how beautiful our world can be. Regardless of the reason for being in the Adirondacks, the desire both the filmmakers and the viewer have to reconnect with the natural world at the end of the film is overwhelming. If you are open minded enough to watch the film, look at the interviews and the evidence then you will experience a fine film, an experience of a documentary that stays with you long after the credits roll. If you are a bit closed minded, then watch it anyway for the beautiful landscapes and dreams of escapism it conjures.

On the Trail of Bigfoot: The Journey will be available to purchase or rent on June 8th on a number of platforms from 1091 Pictures, including iTunes, Amazon Prime Video, Vudu and FandangoNOW.
Images - Small Town Monsters
Email ThisBlogThis!Share to TwitterShare to Facebook