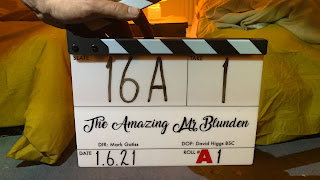 June is bustin' out all over, so it's beginning to look a lot like... Christmas? The Amazing Mr Blunden, a festive Sky Original film from Mark Gatiss, has started filming...

Filming has begun on The Amazing Mr Blunden, a Sky Original family adventure for Christmas 2021. Written and directed by Mark Gatiss and produced by Adorable Media in association with Sky Studios, the 90-minute film will air on Sky and streaming service NOW forming a highlight of the festive schedule.

Starring Simon Callow as Mr Blunden with Mark Gatiss and Tamsin Greig as Mr and Mrs Wickens, the film introduces Tsion Habte and Jason Rennie as Lucy and Jamie Allen, alongside India Fowler and Xavier Wilkins as Sara and Georgie Latimer.

Christmas adventure arrives for London teenagers Jamie and Lucy Allen in the form of a mysterious old man, Mr Blunden, who offers their mum the opportunity to become the caretaker of a ruined country house – one that’s said to be haunted. Within its neglected, overgrown grounds, Jamie and Lucy have an encounter with what appears to be a pair of ghost children. But these spooky kids, Sara and Georgie, aren’t actually ghosts. They’ve travelled forwards in time to seek help, believing they’re going to be murdered by the wicked Mr and Mrs Wickens. And Lucy and Jamie’s strange visitor seems to be the key to it all. With his help, they must travel back to 1821 to save Sara and Georgie and redeem their remorseful new friend - The Amazing Mr Blunden.

Jon Mountague, Director of Comedy, Sky Studios, said, “When we learnt that the incomparable Mark Gatiss wanted to update this absolute classic for the 21st century, we thought all our Christmases had come at once. The Amazing Mr Simon Callow and Tamsin Greig complete a trio of national treasures, and introducing an incredible young cast alongside, we couldn’t be prouder – roll on Christmas!”

Mark Gatiss, Director, added “To me, everything about ‘The Amazing Mr Blunden’ is magical. A ghost story with a sentimental heart. A costume drama with a time-travelling twist. Scary villains, melancholy, laughter and joy. I first came across the wonderful original film at primary school when it was shown on a battered old projector on that most hallowed of occasions - the last Friday before the Christmas holidays. In our new version, as in the book, the Allen family are very much from the modern world. I can’t wait to share the adventure with a whole new audience”.

The Amazing Mr Blunden is adapted from the novel ‘The Ghosts’ by Antonia Barber and the 1972 film of the same name. It was commissioned by Zai Bennett, Managing Director of Content for Sky UK and Ireland and Jon Mountague, Sky Studios’ Director of Comedy. Produced by Richelle Wilder and Isibeal Ballance, directed and written by Mark Gatiss, the show is executive produced by Adorable Media, Can Do Productions, Handmade Films and Jon Mountague for Sky Studios. NBCUniversal Global Distribution will handle international sales of the film on behalf of Sky Studios.

The Amazing Mr Blunden will air on Sky and streaming service NOW this Christmas.
Email ThisBlogThis!Share to TwitterShare to Facebook