Film - The Inn of the Sixth Happiness 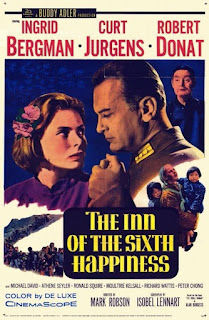 With the film coming to the Cheltenham Music Festival next month, with tickets on sale to members today, was Tony Cross happy in The Inn of the Sixth Happiness...

I did not particularly enjoy this film. It has good intentions I think, but it is overlong and a little overblown. There is also the problem of casting of characters that are meant to be Chinese, but more of that later.

This film is based on the real-life story of British missionary, Gladys Aylward. In the film version Gladys Aylward is played by Ingrid Bergman who, of course, looks and sounds nothing like the real Gladys Aylward, who was a short Cockney woman. Indeed, the real-life Aylward looks a bit like my Nan (and might be better played by, say, Joanna Scanlan.)

This is one of these films that shows an outsider fighting her way to her goals. Aylward is initially rejected because she is not properly educated (which you can read as bit of class snobbery.) But one of the missionaries finds her work. She saves her money for a ticket to China, joins Jennie Lawson (Athene Syler) as her assistant. Lawson had set up a place for travelling people to rest and inflict Bible stories on them. Lawson dies and Aylward takes over the Inn, which becomes the titular ‘Inn of the Sixth Happiness.’ (Although apparently in reality it was called The Inn of the Eight Happinesses, which makes more sense from a Chinese cultural point of view.)

She finds herself appointed as a ‘foot inspector’ by the local Mandarin of Yeng Chang, Robert Donat. Yes, you read that correctly – Robert Donat. It is casting much of its time, but it is still Yellow Face, and it is from modern perspective uncomfortable. The same also applies to Curt Jürgens as Captain Lin Nan, although in his case they do at least pretend he is half-Dutch, which allows Jürgens to avoid the need for a cod Chinese accent*. And to be fair to Robert Donat, he too avoids the worst of vocal Chinese caricature, even if there is a little hint of it. 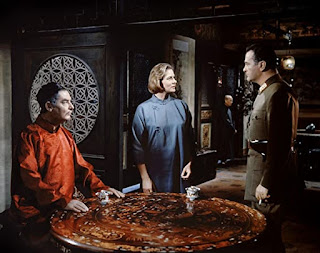 There are Asian actors in the film. There is Bert Kwouk, who is at the start of his career as the go to guy for Hollywood Asians for a lot of the 60s, 70s and into the 80s. There is also Tsai Chin as Sui-Lan, one of the older of the children that Aylward is trying to save. I watched and reviewed a fine film about Tsai Chin’s life and career, “The Girl from Shanghai”, which I recommend. All of which is nice but does not get away from the Donat and Jürgens.

Obviously, being a Hollywoodised version of true events there must be romance, which I think could all have been cut out and done the film no damage at all. Indeed, the ending is probably torpedoed by this made-up romance. (Aylward said that she had never even kissed a man at this point.) The romance makes Aylward’s motivations seem driven more by the flesh than the spirit. It demeans the character – and by default the real person – I think.

This is not a terrible film. Once we get to the Japanese invasion and the journey to get the children to safety there is a genuine tension and brutality. This might be a Hollywoodised version of history, but it does not skip entirely over the terror and cruelty of China at this time. China is one of those far away countries about which we – as British people – know little and what most of us know is cliché and myth. We particularly do not know much about the China before World War Two, except we may have heard of the Rape of Nanking. Yet, there is an argument to be had that World War Two did not begin in 1939 but with the Japanese invasion of Manchuria in 1937. This film does, at least, give an insight into that time and place.

The performances are mainly fine, although I do not think it is Ingrid Bergman’s finest hour, but fundamentally I found this film too long. There is a great story in here and Aylward’s real life sounds like a story worth telling. But perhaps in this day and age a HBO style television series would be better. Something where more of the reality can be allowed to breath and one where Chinese and Japanese actors get to play all the Chinese and Japanese characters.

It also raises an important question. Is a life without romance not a life worth telling in film? The need to push a romantic plot into the story of someone’s life because without it that life is somehow invalid whatever that person achieves seems to be an endemic film industry problem – yes, Ammonite I am looking at you. That, however, is a question for another day.

*Indeed, in the trailer his character is announced as Lin Nan the Eurasian.
Tickets for the Cheltenham Music Festival screening of The Inn of the Sixth Happiness goes on sale to Members on Fri 04 Jun at 10:00am. Public booking opens on Mon 14 Jun at 10:00am. Find out more about the Festival here.
Images - IMDb
Email ThisBlogThis!Share to TwitterShare to Facebook