Film – The Spy Who Came In From the Cold 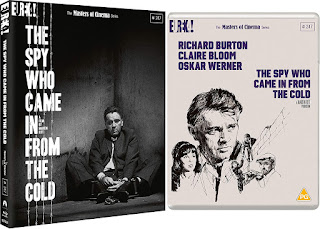 With the film getting a new Blu-ray release on The Masters of Cinema Series thanks to Eureka Entertainment, Steve Taylor-Bryant came in from the sunshine to watch the classic film The Spy Who Came In From the Cold...


I have always appreciated John Le Carre as an author almost without peer when it comes to espionage thrillers, despite preferring Len Deighton’s Bernard Samson character over Le Carre’s George Smiley, so when you get the opportunity to read or watch a Le Carre work that contains little or no Smiley it is always a blissful experience. Tinker, Tailor, Soldier, Spy may well be regarded as Le Carre’s masterpiece and the 2011 film from director Tomas Alfredson with Gary Oldman in the Smiley role is certainly deserving of every plaudit it garnered but the best Le Carre in my mind is from a novel released in 1963 and a film from two years later starring Richard Burton, The Spy Who Came in from the Cold.
I remember watching the film many years ago and marvelling at its monochrome beauty but after a childhood raised on James Bond, I did not quite understand the lack of action. The naivety of youth for sure because in later life, when you have many more spy novels imbedded in your psyche and you are mature enough to realise that most spy craft is a transfer of information rather than a wild west shootout you cannot help but marvel at plot of Cold and the subtlety in the performances of a wonderful cast. Why am I writing about a forgotten age and a black and white film from the mid-1960s? Because there is a new Masters of Cinema release of the film from Eureka Entertainment that is beautifully put together and has given the film a new lease of life with the chance for a new audience to discover what some of us have known for decades, that Martin Ritt’s interpretation of Le Carre’s work is indeed a masterpiece.

Alec Leamas (Richard Burton) is the operative for the British Secret Service overseeing the field Agents and their activities in Berlin. Recent activities in the field in Berlin and Alec's long-term status in the position make his London-based boss, Control (Cyril Cusack), openly wonder if Alec is burnt out and thus needs to come in from the cold to a London-based desk job. Alec's deteriorating state of mind is what Control wants the enemies to believe, as he asks Alec to do one last job out in the field. Alec is to pretend to become a drunkard who has left the agency due to his perceived failings in the job, working whatever odd jobs he can get, given his previous secret work. This change in attitude would make Alec ripe for turning information to the enemies. What Alec is supposed to do is implicate top East German Agent Hans-Dieter Mundt (Peter van Eyck) as a British double Agent, leading to Mundt being murdered by his own. The Brits expect Mundt's second in command, an East German Jew named Fiedler (Oskar Werner) who hates his ex-Nazi boss, to be the unsuspecting accomplice in this plan. Beyond the regular dangers in Alec being found out, or Mundt being able to convince his masters of his innocence, Alec faces one initially unintended obstacle, namely his relationship with a librarian named Nancy "Nan" Perry (Claire Bloom), whom Alec has met during his cover job as a library assistant. She is openly a member of the British Communist Party, but in her idealistic state, sees herself as drunkard Alec's saviour. Alec wants to keep her out of what is occurring, which may be difficult, as both sides, while watching Alec's movements, will see their involvement with each other. 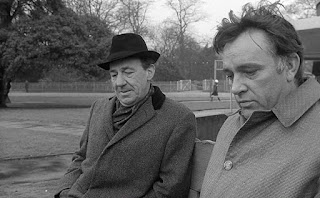 What you will learn from the wonderful written essay from Richard Combs included in a beautifully presented booklet, and from a great video essay by critic and filmmaker David Cairns is that, from the very beginning, Richard Burton may not have been who the creative team were looking for, that Burton could be a loud and brash superstar of film and theatre and may not manage playing so withdrawn and silent and calm. There were concerns about his lifestyle, his past dalliances with the film's co-star Claire Bloom, and there was issues at the time with cast and crew and the blacklist situation going on in cinema at that time. The information from both essays arms you as a viewer with an even higher level of respect for the film and the performances. A Le Carre story is so intricately written that there is no room for plot holes, so the entire pressure of a production is on performing such good material authentically and well. I knew of Burton as this loud and proud film star, sometimes phoning it in or overacting, sometimes being a magnetic performer but even I never expected such subtlety from him and his performance as Alec Leamas is, in my humble opinion, the best he ever committed to celluloid. Bloom was great, and there was stellar performances up and down the cast list, from the likes of Sam Wanamaker as Peters to Peter Van Eyck as Hans-Dieter Mundt, the cast was all highly watchable and had their parts to play in the grander whole but the one who went toe to toe with Burton in a performance of the very top drawer was Oskar Werner as Fiedler, he was dominating yet collaborative, extremely intelligent and yet led by his heart and the courtroom scene when the entire plan is spelled out to him see Werner outclass everyone else on the screen.

The film is beautifully shot with interesting locations and intriguing camera positions and the dialogue more than makes up for the lack of action found in other spy thrillers. Le Carre writes with such elegance that I would imagine sitting at a typewriter as it was then to adapt his work would have been a battle Paul Dehn (Seven Days to Noon/Goldfinger), who came on board the project after Guy Trosper (Birdman of Alcatraz) fell ill and sadly passed, both did an incredible job giving Burton the words to bring Leamas to life. The Spy Who Came in from the Cold was always a great film but the Eureka Blu-ray release with its High Definition clean and crisp version and its special features it feels like all my Christmases have come at once.