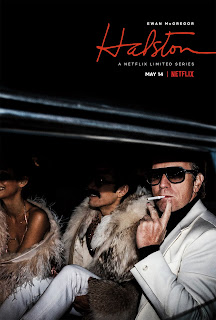 First of all, I feel like I have to state that I personally have no interest in the fashion industry, which I guess is what makes it surprising that I would watch a TV series depicting the life of U.S fashion designer Roy Halston Frowick.

I was mainly interested in the series after hearing about it during an “actors on actors” Variety video between Pedro Pascal and Ewan McGregor. When discussing the Halston TV show, McGregor mentioned that at the time, he was looking for projects that would allow him to “grow” and after talking with the Director of Halston he says  he got along with him well.

There was a combination of hearing about how this show challenged Ewan McGregor and also hearing about how he feels like he’s approaching roles involving addiction “through a new lens” after experiencing alcohol addiction for himself that made me intrigued enough to give this series a chance and I have to say it does not disappoint.

So yes this is another story about a creative mind that ultimately turns to drugs, which seems to be the case in a lot of “true story” depictions of celebrities, but one thing that made this story stick out to me was the TV series format, and how it allows a creator's life to be told in much more detail.

The show knows when to jump around in time, whether it be to a memory that he has of when he was a child or jumping forward in time to get to each of the major events in his life. It’s clear that when he was younger he didn’t feel safe at home due to his father being abusive to his mother. The story knows when to throw us back into this memory, whether it be when Halston is reminiscing when his passion for making hats began or reaffirming the feeling of being trapped or scared that he felt as a child, and still feels at an older age, in a way he seems to be still trying to escape that feeling.

The many people that Halston surrounds himself with is also another reason why telling this story in a TV show format is more effective, because it helps us as viewers not only grow to care about them but see how everything in Halston’s life leads him to push them away. Elsa (Rebecca Dayan) for example is a model with a loyalty to Halston because as Halston says, Elsa doesn’t care about the money. I think it’s because of this loyalty that Elsa and the rest of Halston’s group have to him, that they work so well as a group together, however, I think it’s clear that money changes all of them eventually in the show. 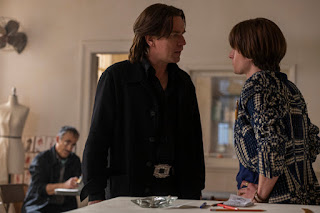 Except for Schumacher (Rory Culkin), a designer whom Halston saw great potential in in the early episodes and has to have a serious conversation with him about the speed he’s been taking to deal with the stress of the work, I suppose this scene is all the more important when you look at how much Halston falls into drugs like Schumacher did. As a creator, the conversations were also impactful because of quotes such as “it takes one socialite to change everything” when Schumacher asks Halston how he copes with all the stress and I suppose Halston does change everything for his company, just not in the way he expected.

Like many true stories about creators there’s a theme of conflict with businessmen in this story because ultimately when you’re trying to sell your creation to the public you need someone to handle the money side of things as Halston even admits ‘he’s not a businessman’. It’s the conflict of art and business that makes this story more interesting, such as when Halston clearly begins working on products that he doesn’t have so much of a passion for and is only working on for the sake of making money. Even earlier than this when he was struggling to pay the electric for his company building he would turn to drugs/sex, which in turn would affect his creativity so it’s clear there’s an internal conflict there as well, as Halston struggles with inspiration.

As Halston continues to struggle it’s the reviews in the papers that are a great indication of his character growth, to begin with he clearly depends on the reviews for his company to garner the attention it needs, but as he becomes more successful he comes to believe that “reviews don’t matter”, its only after Halston lets go of his ego that he’s able to confront the negative reviews again, and use them to do better.

Going back to Ewan McGregor, his portrayal of this complicated fashion designer (as shown in small clips in the variety interview) was the thing that made me curious to watch this series and it’s his performance that makes me recommend this show so highly. Between the way McGregor completely changes his voice to fit Halston’s character to the way he walks and simple hand gestures it’s easy to forget McGregor is playing him. It was this complete change he makes when he becomes Halston that makes me excited to explore more of Ewan McGregor’s work.

I think in a lot of ways, when a story isn’t limited by the number of hours (like in a film) or the number of episodes (like in a show that must feature however many episodes) some incredible stories can be told like this one and I may even seek out more hidden gems like this on Netflix.
Follow Kraig on Twitter @Kraigandhismac
Images - Netflix
Watch Halston on Netflix
Email ThisBlogThis!Share to TwitterShare to Facebook