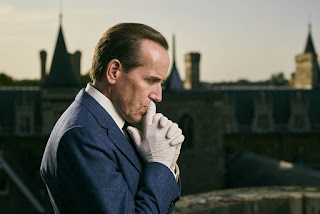 The box-set of the six part drama, based on the hit Belgian series of the same name, will be made available exclusively to BritBox subscribers before airing on ITV later this summer.

Jasper Tempest played by Ben Miller, a Professor of Criminology at Cambridge University. He is obsessed with cleanliness, structure and order but his genius for solving crimes means he is constantly having to get his hands dirty, helping the police to crack their most difficult cases.

Talking about the show, Ben said, “I saw the original Belgian series and loved so much about it, and I love how Jasper is this very unusual criminal psychologist. The stories and puzzles are really intriguing, but what I love most of all is that every character has a proper backstory. Jasper’s is revealed little by little.”
He added, “Professor T has it all: intriguing murders, dreaming spires, and a cast of unforgettable characters, each with their own fascinating secrets. You don’t have to be a professor of criminal psychology to know the ITV audience will love it.”
Tony award-winning actress Frances de la Tour plays Jasper’s colourful, but overbearing mother, Adelaide. Emma Naomi is Detective Inspector Lisa Donckers and rising star Barney White is her police sidekick Dan Winters.
The opening episode sees the Professor unwillingly caught up in a police investigation when Diana Tyson is attacked on the university campus. DI Lisa Donckers thinks the attack is very similar to one that occurred years beforehand. And she reckons the Professor is just the man to crack the case.
The cast also features Juliet Aubrey, Andy Gathergood, Sarah Woodward, Ben Onwukwe and Douglas Reith.
Image & info - Britbox
Email ThisBlogThis!Share to TwitterShare to Facebook