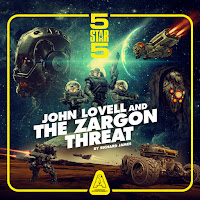 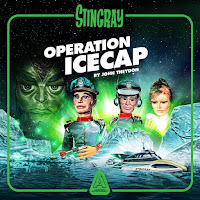 There’s action aplenty for Anderfans this summer at Big Finish, as two new audio adventures are set to be released this month and next...

Five Star Five: John Lovell and the Zargon Threat and Stingray: Operation Icecap are the next Anderson Entertainment audio adventures to be digitally distributed by Big Finish. With epic scores and brilliant vocal talent, these releases will delight and surprise fans old and new.

The first story, due at the end of July, is Five Star Five: John Lovell and the Zargon Threat, adapted by Anderson stalwart Richard James from an unmade 1978 film script. Read by Robbie Stevens, this epic audiobook adventure takes place on the planet Kestra, where peace is threatened by Zargon forces – and only one team can save them...

THE TIME: THE FUTURE

THE PLACE: THE UNIVERSE

The peaceful planet of Kestra is under threat. The evil Zargon forces are preparing to launch a devastating attack from an asteroid fortress. With the whole Kestran system in the Zargons' sights, Colonel Zana looks to one man to save them.

Except one man isn't enough.

Gathering a crack team around him including a talking chimpanzee, a marauding robot and a mystic monk, John Lovell must infiltrate the enemy base and save Kestra from the Zargons!

And due for release in August 2021, Stingray: Operation Icecap is a brand-new full-cast audio adaptation by Ben Page, based on the 1965 John Theydon novel Stingray. Featuring music from Benji Clifford and with a cast including Marc Silk, Jules de Jongh, Wayne Forester and Nicholas Briggs, this audio adventure stays true to the style and spirit of the 1964 TV series.

The Stingray crew discover an ancient diving bell that leads them on an expeditionary voyage through the freezing waters of Antarctica to the land of a lost civilisation. Close on the heels of Troy Tempest and the pride of the World Aquanaut Security Patrol is the evil undersea ruler Titan. Ahead of them are strange creatures who inhabit underground waterways, and an otherworldly force with hidden powers strong enough to overwhelm even Stingray's defences.

Stand by for action as the mighty Stingray launches again in this classic adventure!


Executive producer of Anderson Entertainment Jamie Anderson said: “It's great that we're able to bring these two very different projects to life through the glorious medium of audio, and there's no better digital partner for us than Big Finish. Both releases share the Anderson magic despite their genesis being separated by 15 years. I can't wait for Anderson fans, and brand-new listeners, to enjoy these new sci-fi extravaganzas!”