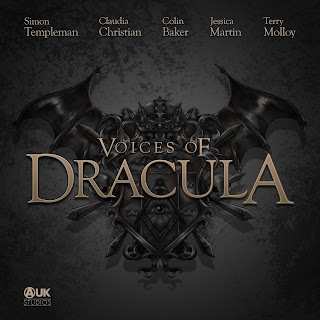 Like your audiobook with a bit of bite? AUK Studios has released Voices of Dracula, a collection of ten all new short stories based around the original Bram Stoker novel...

In writing Dracula, Bram Stoker created a universe full of rich characters, dark and foreboding locations, and a tangled web of loyalties, relationships and motivations. Despite the story being fictional - at least one hopes that’s the case - many elements within the story were reflections and analogies of the Stoker family and their history.

A little over 120 years after the book’s original release, Bram’s great-grandnephew Dacre Stoker has teamed up with author Chris McAuley to create a series of short stories set within the StokerVerse, each narrated from the point of view of one of the characters we all know - or think we know - so well.

Narrated by some of the leading voice actors of today, Stoker’s short stories are dark, twisted and of course hugely entertaining.

This exciting audio series takes listeners through an exclusive new take on Bram Stoker’s original novel, as the brilliant actor Simon Templeman sinks his teeth into the legendary Dracula role.
Chris McAuley (who co-wrote the story aided by Canadian author Dacre Stoker [yes, relation - Ed]) explains more, “Voices of Dracula is a unique take on the characters of Bram Stoker’s original, classic novel. Featuring iconic actors, this tale is a snapshot of the character’s journey through the horror masterpiece. The audio answers questions such as ‘How Renfield entered the Asylum’ and brings listeners further into the mystery of Dracula’s motives... This is a thrilling and chilling tale of Darkness.”

Voices of Dracula is directed and produced for AUK Studios by Barnaby Eaton-Jones.

Barnaby said, “Dracula is the epitome of the horror genre - that one, lone, scary figure who swept into the human consciousness, via the genius of writer Bram Stoker. It’s a tale often re-told and reworked, so it was a delight to be asked on board Voices of Dracula because of its heritage and the fact this is an ‘official StokerVerse’ release from Dacre Stoker.” He added, “Dacre Stoker is the great-grand-nephew of Bram Stoker, and Chris McAuley has pedigree in the creative world, so they’ve combined to create the Stokerverse. Alongside ‘The Virgin’s Embrace’ graphic novel, this is the beginning of their world building and I look forward to seeing what’s to come from them. To be able to work with the voices on show here was a delight and they didn’t really need direction. I’m happy to have produced it, though!”

As well as Simon Templeman, whose voice you might recognise from his work in the popular videogame series, Legacy of Kain, as Tenaval, and as Cryptkeeper Kassir in World of Warcraft: Shadowlands, you will also find the supremely talented Claudia Christina amongst the stellar global cast. You’ll be sure to know her for her starring role as Commander Susan Ivanova in Babylon 5, playing Captain Maynard in 9-1-1, and as the voice of Hera in the popular Netflix series, Blood of Zeus. In Voices of Dracula, Claudia plays a mystery character known only ‘The Victorian Thief’... who she actually is will be revealed all in good time!
Here is a bit more about each of the stories:
Cast list

Simon Templeman – as Dracula (in the tales ‘Insidious Design’ and ‘His Final Battle’)
Claudia Christian – as The Victorian Thief – (A new character created for Bram Stoker’s universe) - (in the tales ‘The Cleric’s Crypt’ and ‘A Poison in the Blood’)
Colin Baker – as Van Helsing (in the tales ‘A Call To Arms’ and ‘Dark Symmetry’)
Terry Molloy – as Renfield (in the tales ‘Involuntary Madness’ and ‘His Master’s Call’)
Jessica Martin – as Mina Harker (in the tales ‘A Woman Scorned’ and ‘A Husband’s Pain’)
AUK is also the exclusive distributor of this (fully funded by AUK) audio drama event, as part of its growing audio development roster.