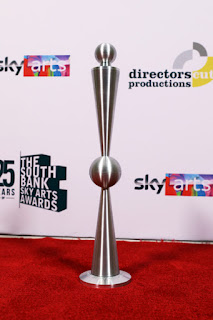 Last night saw the televising of this year's South Bank Sky Arts Awards winners' ceremony so *SPOILERS* ahead if you still want to watch it...

25th Anniversary South Bank Sky Arts Awards, the first in-person awards ceremony post-pandemic at The Savoy, saw a host of artists and projects from the entire spectrum of the Arts celebrated for their achievements in the past 12 months. This year’s recipient of the coveted Outstanding Achievement Award was Grayson Perry.

Presented and edited by Melvyn Bragg, The South Bank Sky Arts Awards continued its legacy as the only awards ceremony in the world to celebrate the complete range of the Arts, with categories for TV Drama, Classical Music, Theatre, Comedy, Dance, Film, Visual Art, Pop, Literature and Opera.

Singer and songwriter Dua Lipa took home the Pop award for Future Nostalgia, her sensationally popular album which received critical acclaim across the board. The universally renowned and multi-award winning I May Destroy You was victorious in the TV Drama category, meanwhile Hamnet, a fictional account of Shakespeare's family life by Maggie O’Farrell, scooped the Literature prize.

Winners on the day also included the hugely popular, hilarious series Ghosts for Comedy, the eloquently poised Scherzo by The Royal Ballet for Dance and the multi-faceted Rocks for Film. The Awards also celebrated emerging talent with The Times Breakthrough Award, which was presented this year to playwright Samuel Bailey, whose breakthrough play, Shook, was an immediate sensation after a sell-out run at Southwark Playhouse and a national tour.

Melvyn Bragg said: “The Arts have kept up their reputation for excellence in difficult circumstances. Without question they are world class, as these Awards show.”

Phil Edgar-Jones, director of Sky Arts said: “We’re excited to be carefully inviting Britain’s best and brightest Arts practitioners back to the South Bank Sky Arts Awards in its 25th year. Despite the ravages of the pandemic great art continues to thrive against all odds and, more than ever, we want to celebrate all the joy the creative industries bring.”

Grayson Perry, Outstanding Achievement Award winner, said: “I’ve grown up with The South Bank Show, Melvyn and Sky Arts. It feels more than any other ceremony, it’s collegiate, it’s our ceremony. The Arts, as a family. I think coming out of Covid it feels especially touching, I think that’s what’s made it so moving for me really, and I feel very proud. I also feel too young!” 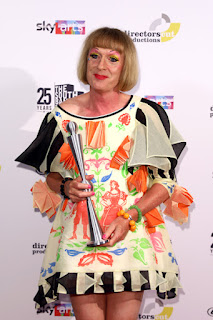 Here's the list of category winners and other nominees [and our own Mystic Mug, Susan Omand's, predictions [guesses - Ed] which were made over on our sister site at AlbieMedia Arts & Music when the nominations were announced last month]