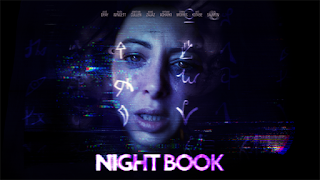 The interactive thriller Night Book, starring Colin Salmon and Julie Dray, is set to be released from 27th July on Steam (PC & Mac), PS4, Xbox One, Switch and iOS by Wales Interactive and Good Gate Media. Watch the trailer...

A completely live action, interactive movie, filmed remotely during lockdown, Night Book is an interactive thriller about an online interpreter who is tricked into reading an ancient book that summons a demon into her home.

Loralyn (played by Julie Dray) works the night shift remotely from her home, live interpreting video calls from English to French and back again. Currently pregnant, with a husband working far away and caring for her mentally ill father, she is desperately trying to keep her family together and safe – but who is she prepared to sacrifice to survive? The fiancé, the baby, her father or herself?

From the producers of The Complex and Five Dates – John Giwa Amu (The Party, The Roads Not Taken, The Machine) and Sarah Barker (The Runaways, Censor, Looted); co-developed by the studio behind Maid of Sker and Directed by Alex Lightman (Tear Me Apart), Night Book is one story with several different paths and endings. It was shot remotely during lockdown, in Paris, London, Birmingham and Cardiff, using Blackmagic cameras and event recording technology. Making this interactive film incredibly unique, the actors filmed themselves and were responsible for their lighting, make-up and continuity.

Dr David Banner MBE, Executive Producer/Co-Founder, Wales Interactive said: “Wales Interactive is proud to be collaborating again with Good Gate Media in what has developed into a very successful partnership where the best of the gaming and film worlds unite. We are thrilled that out of such a challenging year for all, creativity and productivity in the gaming and film worlds has not held us back. We are continuing to produce more cutting edge interactive films using the latest technology to add to our slate, with more to come. So watch this space!”

Producer and founder of Good Gate Media, John Giwa Amu added “Good Gate and Wales Interactive’s continued collaboration has lead to a very busy June – we’ve delivered our chilling horror, Night Book, with an exceptional calibre of on and off screen talent.”

Coming to PC and all major consoles on July 27th. Pre-order & Save 10% on Steam.
Image - Wales Interactive/Good Gate Media
Email ThisBlogThis!Share to TwitterShare to Facebook