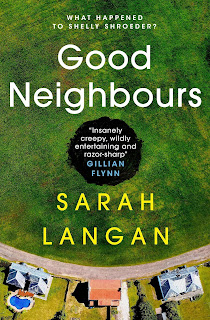 Welcome to Maple Street, a picture-perfect slice of suburban Long Island, its residents bound by their children, their work, and their illusion of safety in a rapidly changing world.

Is this book a thriller? A great attempt at a synopsis written for a new TV show on a streaming service of your choice? Or is it just a depressing look at people and society? Well, strangely, it reads as all three, which was a weird experience for me and I found the mix quite off-putting for large parts of the book although it was enthralling in others. It left me wondering if maybe just one fewer element had been decided on, whether I would have enjoyed the book more. I did enjoy the very dark look at peer pressure, rumour mongering, and the mob mentality that is unfortunately a huge part of the world we live in. However, the book's structure, with its time-jumping media excerpts, the kind of the thing you'd expect to find in the aforementioned TV show, took me out of the story too often.

I enjoyed the themes the book touches on, some delving deeper than others, but Good Neighbours is filled with strong characters who were all just awful people, whose selfishness and emotional brutality towards one another left me with nobody to root for. Whilst large parts of the story are blackly funny because of this, there has also to be an out, some respite for the reader, and that I just didn’t find.

Maybe this book is cleverer than I’m giving it credit for but I’m not sure - for me, it just couldn’t make its mind up what it wanted to be. The stuff I did like, I could picture in my head like it was on a screen, it felt like a cross between Desperate Housewives and a Harlan Coben mini series, and I’d certainly watch this lot of characters bitch with each other week on week if someone like Netflix decided to pick it up. If it does ever make it off the page, though, there definitely needs to be a bit more redemption, or a lighter tone, or a better explanation for some of the shockingly bizarre behaviour.

Good Neighbours wasn’t a book for me, but it will definitely appeal to others and would transpose to the screen well. However, as a written narrative, I found it a tough read, leaving me feeling empty and a bit sad and not in a great way.
Follow Steve on Twitter @STBwrites
Image - Titan Books
Email ThisBlogThis!Share to TwitterShare to Facebook