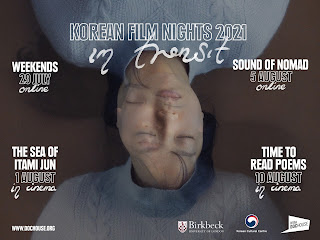 In a special collaboration with Bertha DocHouse, KCCUK and Birkbeck University present a journey into contemporary Korean documentary with four films being screened either online or in Bertha DocHouse cinema in July and August...
Press Release
Korean Film Nights: In Transit addresses the continuously transforming public and private spaces of marginalised communities, which take on new meanings through different cultural viewpoints. These four carefully selected titles offer a meditation on spatial politics, exploring how they intersect with various personal narratives. The programme will take place both at the Bertha DocHouse cinema and online on their website, reflecting the current transient nature of cinema spaces.

In Transit opens with Berlin Film Festival winner Weekends, a story about G-Voice, the first gay choir in Korea. As the group fight for their space to perform on stage, both literally and metaphorically, director Lee Dong-ha shines a spotlight on what happens when the collective helps repressed communities.

Jung Da-woon’s The Sea of Itami Jun treats space in perhaps the most literal way. However, there is more to this than meets the eye. Never quite finding his place in the world, Japan-born Korean architect Itami Jun designs his spaces to utilise the surrounding environment. Nothing is static in his work, not even his architecture is immune to the passage of time.

The theme of the diasporic Korean community is explored in Kim So-young’s Sound of Nomad. A filmic journey that starts in 1937, the film focuses on the Koryo people, displaced from East Russia to Kazakhstan. It looks at how the community creates their own space so far from home by embracing the richness of their culture. By taking care of each other and celebrating their roots, the community creates their own space of belonging and identity. Our screening will feature an exclusive Q&A with director Kim So-young.

The act of finding one’s home is depicted in Lee Soojung’s Time To Read Poems. What connects the five main characters is a drive to create their own safe spaces: mentally, physically, economically and socially. With the sensibility of a poet, the director gives them a way to express their vulnerabilities.

In Transit gives space to the unrepresented, voice to people and stories often left silent or at the social and political margins. The selected films are predominantly directed by women and focus on the Korean diaspora, the working class and sexual minorities. By showcasing these films, we highlight the importance of community and the people with whom we share our lives and spaces. All these films look back as a means to imagine a more connected and inclusive future. In this current moment of continuing uncertainty, of being in transit, they remind us of the potential we have for transformation.
Online screenings
Weekends. Lee Dong-ha, (2016) 98 mins.
Available from 7pm Thu 29 Jul - 11.59pm Sat 31 Jul
Sound of Nomad. Kim So-young, (2016) 88 mins.
Available from 7pm Thu 5 Aug - 11.59pm Sat 7 Aug