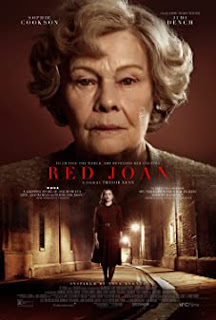 I’m not really sure what I was expecting when I picked up Red Joan. When I say "picked up" I mean from a shelf of films that I’m hesitant to watch because, like the film studios that distribute to Cinema screens these days, I’m hesitant to take a risk. I suppose it seems ridiculous now because I’ve always been curious about modern day politics since I was able to vote. So why not give a political film involving espionage, secrets and drama a chance? If anything, that would be even more interesting, right?

I have to say that it was. For those unfamiliar with the story, Red Joan follows the (somewhat) true story of Joan Stanley, a woman in her late 80’s (played by Judi Dench) who, arrested and accused of being a spy for the Soviet Union, recalls her earlier life and the choices she made leading to her involvement with the Soviets. What surprised me is that this story is also a romantic drama as Joan (also played as a younger character by Sophie Cookson) deals with her complicated relationship with Leo (Tom Hughes), a charismatic member of a communist party and her relationship with Max (Stephen Campbell Moore), a kind, ambitious scientist who also has conflicting political beliefs with Joan.

As a cast, their performances together are brilliant, I found myself seeing Joan Stanley for the young aspiring scientist she hopes to be, whilst studying at Cambridge. Though it’s, ultimately, Joan’s loneliness that leads her to Leo, a man who seems to use her attraction to him to his advantage. 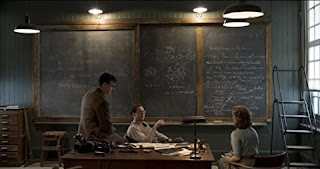 It was the drama between her two romantic entanglements that really sells the movie, it’s strange to think but this film is more of a drama, and not the espionage movie that many might expect it to be. Whilst it doesn’t seem accurate to the true story it is based on, standing on its own it certainly does the job of helping you understand the character of Joan.

It’s understandable that negative reviews followed this film as it does seem to victimise the very real Melita Norwood (that Joan is based on) a little too much. Whilst Melita was clearly influenced by her family and she states that she gave away secrets for the betterment of everyone, she doesn’t in fact, seem to have the same innocence that is portrayed in Red Joan. The story of Red Joan encourages us to believe that Joan is simply a pawn stuck between two political beliefs, which through research I believe there could be some truth to, but nothing definitive to say so. As its own story Red Joan is certainly an interesting one, I suppose the idea was to tell a story that was influenced by the story of Melita Norwood but not entirely accurate as to her influences or her personal life.

The character Joan Stanley (though not so much Melita Norwood), is constantly tortured emotionally, by both her manipulative boyfriend Leo and the events of the bombings at Nagasaki and Hiroshima. I believe that this story was told exceptionally well, and I constantly felt as if I were Joan struggling with allegiances towards either side, though this isn’t the story of Melita Norwood.

The story interestingly tells us what life was like at the time as a woman through the lens of Joan, dealing with the constant assumption that she is just a “pretty face” when working as Professor Max Davis’ secretary, such as during their business trip to Canada where its assumed that by the other scientists that she’s only there to do the laundry. It’s moments like this however that help show us why she was less suspicious to those investigating any potential Soviet Union spies. It’s moments like this that I think are also necessary to help us root for Joan, simply because it makes it seem like she’s rebelling against the female prejudice by working against her country for the benefit of the world.

Overall I enjoyed the film, I felt that standing on its own it was an intriguing story that left me rooting for Joan against her conflicted son (as he has his own reservations of her actions) but also left me seeing his side of things upon a second watch. Again, whilst a lot of the story that is told isn’t true to the character Joan is based on, as its own story that was influenced by Melita Norwood’s, it makes for an intriguing relationship drama that is at least worth a watch.
Follow Kraig on Twitter @Kraigandhismac
Images - IMDb
Email ThisBlogThis!Share to TwitterShare to Facebook