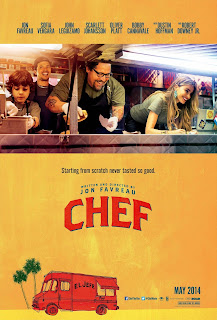 A head chef quits his restaurant job and buys a food truck in an effort to reclaim his creative promise, while piecing back together his estranged family.
That’s what IMDb had to say about Jon Favreau’s film Chef and, whilst it’s accurate, it’s clear that a short description doesn’t do such a heart-warming film justice.

I first thought to watch Chef when I’d heard that the Netflix series The Chef Show was based around Favreau learning to cook various foods, like the character he plays in the Chef movie. It was that curiosity that lead me to search for the film and find it on Amazon Prime. If you haven’t seen the film you might wonder what makes Chef heart-warming? It could be its relatability, the fact that it’s also an inspiring story, or a combination of things.

I personally think the heart-warming nature of the film comes from a message of loving the little things in life, which includes loving what you do for work. That’s something that Carl Casper (played by Jon Favreau) struggles to do, as he battles with the restaurant owner Riva (played by Dustin Hoffman) for control of the menu.

Not only that but it’s the relationship between Carl and his son Percy (Emjay Anthony) that makes this film a heart-warming father-son story. To begin with the only time that they spend together is when Carl buys supplies for work, or when he spends money on things that they do together that don’t involve communicating, and it’s the situation forced upon Carl that gives him the opportunity to finally connect with his child.

That’s also what makes this film relatable, the fact that family is one of the core themes, after all, it’s his family that is there when he needs them most and motivates him to not give up on his passion for cooking. I personally found it relatable not just through the fact that I enjoy talking/ hanging out with my own Dad like Percy does, but because I felt more connected with Carl and his struggle to find time for Percy because when my Dad was working as a chef, I also didn’t see my Dad very often. 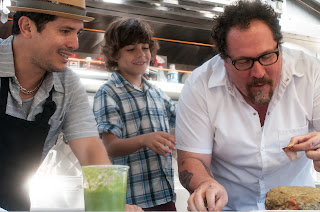 I suppose what’s inspiring about the story is that Carl’s constantly battling. Whether that be the business that Riva runs (battling for creativity), battling with critics/negative opinions about his cooking, or battling with himself, as it seems like he cooks in his free time to prove to himself that he still has a passion for cooking.

Whilst this inspiring story, involving balancing business and creativity has been done many times before, like in Jobs (the story of Steve Jobs) among other movies (especially ones based on real people), this one also brings a lot of fun as well. It was originally hard for me to consider that a chef would have an issue balancing business with creativity, probably because I struggled to see cooking as an art until I saw this film.

I suppose that’s strange, considering I have a passion for trying different foods, and my dad used to be a chef himself. I guess I was never properly thrown into the perspective of a chef until I saw this film. It artistically pieces together Carl’s home life mixed with how he experiments with his cooking in his own time to help us understand his life in that way. Combine that with the surprising appearances of Hollywood icons Robert Downey Jr, Scarlett Johansson and of course Dustin Hoffman, then you really do have all the recipe for success it seems, as their performances help us believe in Carl Casper’s story, and clearly have an impact on Favreau’s own performance and I think having all of these ingredients in the mix makes a great film that’s enjoyable for all.