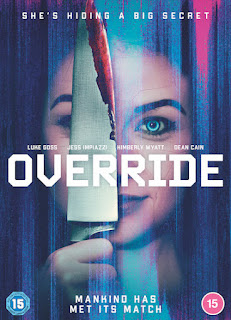 The legendary Luke Goss stars alongside Superman himself Dean Cain, and Jess Impiazzi (The Seven, Dangerous Game) in Override, a terrifically entertaining, smartly plotted mix of Ex Machina and I, Robot, about a futuristic reality show using an alluring female android that goes badly wrong.

Ria (Jess Impiazzi) is a young woman who finds herself reliving the same day over and over. Each day Ria wakes up to her normal routine but finds a different person playing her husband ‘Jack’ by her side. Why? Because Ria is actually the star of her own reality show ‘A DAY WITH RIA’.

Each husband is a contestant, there to show the world what they are made of. Ria re-lives her perfect 1950’s housewife day over and over again, until one day her routine becomes tiresome and Ria holds the current Jack (Charlie Clapham) to ransom.

This Jack also happens to be the Vice President (Dean Cain) of the USA’s son. These dramatic turns of events mean the public discovers the true massive conspiracy behind Ria, her husband(s) and one man’s (Luke Goss) secret vendetta against the Vice President. 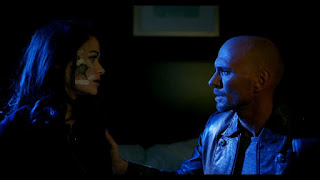 Written and directed by Richard Colton and produced by Amar Adatia and Ada Chyrowska, Override is stylishly filmed, with sleek effects and a pulsing soundtrack, the film wouldn’t look out of place as a slick and sexy feature-length Black Mirror episode.

Packed with action, dark satire and twists, and crammed with quirky details of what the world might look like in twenty years’ time, Override joins the ranks of recent dystopian techno thrillers as a wild ride into a future world gone awry.

Override is released by 4Digital Media in the UK on DVD & Digital on 6th September
Image - 4Digital Media
Email ThisBlogThis!Share to TwitterShare to Facebook