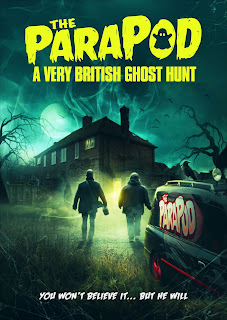 Blue Finch Film Releasing & Infinite Hermit have announced that the docu-comedy The ParaPod: A Very British Ghost Hunt will be coming to select UK cinemas this September & on VOD from 27th September...
Press Release

After 3.5 million podcast* downloads, sold-out live shows and hit specials, get ready to go on the road with hardwired skeptic Ian Boldsworth. Follow as he goes head-to-head with lifelong believer Barry Dodds to discover the truth about the supernatural.

Taking to the roads of the UK in a souped-up hearse, they visit the UK’s most haunted village, the home of the world’s most violent poltergeist, the underground labyrinths of Edinburgh, and everywhere in between. What follows is a rollercoaster of conflict and hilarity, as Barry tries – with increasing desperation – to find the proof to convince his cynical friend that ghosts are real.

Documentary-filmed completely on location over a three-year period, The ParaPod – A Very British Ghost Hunt is produced by Bil Bungay (Moon, Diego Maradona, Nureyev, When The Lights Went Out), directed by and starring award-winning podcast pioneer Ian Boldsworth (The ParaPod, Peacock & Gamble Podcast, The Mental Podcast) with multi-award-winning comedian Barry Dodds.
Director & star Ian Boldsworth is excited for the release saying “The sell-out preview of January 2020 in London’s Leicester Square rather cruelly tricked me into believing this arduous journey of listening to Barry’s ghost nonsense had an end in sight. In March 2020, two dates into the UK screening tour, it was clear that the universe had other ideas. So I am truly delighted that this unique film is finally going to be witnessed by others, and I can get the sympathy I deserve for putting myself through this supernatural bombardment.”

Co-star Barry Dodds also can't wait for the release saying "After what has felt like (and literally has been) years of waiting for the wider world to see the film which dominated so much of our working lives, it’s a real pleasure to know that it will finally be out there for the world to see. It’s a very unique experience to hear oneself in the grip of mind-bending fear but I hope both sceptics and believers will take away something from this film, hopefully, something different to what they brought to it”
* ABOUT THE PODCAST
The multi-award-winning-nominated ParaPod Podcast came to life in 2015, after Ian and Barry had argued about a haunted house (or house) on Ian’s radio show. The first series dealt with ghosts and hauntings, whilst series 2 and 3 addressed Mysteries and Conspiracy Theories respectively, with over 1.5 million downloads to date, a huge, growing fanbase and a movie currently filming. There was also a two-part special recorded at 30 East Drive, home of the world’s most violent poltergeist, which is not for the faint-hearted…

If you want to know the truth about the Enfield Haunting, the genetic history of the Chupacabra, the relevance of the Babadook, how Marilyn Monroe influenced the assassination of JFK, and why Ian is shaking his head right now as he types this list, all three series are available for free on itunes and Soundcloud.
The ParaPod – A Very British Ghost Hunt is coming to cinemas this September and on VOD 27th September. Find out more, and where the cinema screenings are, on the ParaPod website.
Image - Infinite Hermit
Email ThisBlogThis!Share to TwitterShare to Facebook