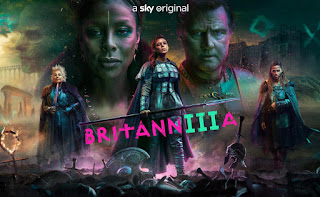 Promising to be epic, action packed, full of humour and terrifying in equal measure, series three of Britannia sees a radical transformation in Cait’s (Eleanor Worthington-Cox) journey as the Chosen One with a decision that will tie her to the future of her war-torn people and their ravaged land. Aulus (David Morrissey) comes under pressure from a new and dark force - otherwise known as his wife (Sophie Okonedo), whilst Amena (Annabel Scholey) finds herself in a lethal Ménage à trois with both of them. Divis (Nikolaj Lie Kaas) gets a new job which he despises, and Veran goes to the underworld and sees the future.

Britannia was created by the multi-award-winning writers Jez Butterworth, his brother Tom Butterworth and James Richardson.

Series three is written by Jez and Tom Butterworth and Mackenzie Crook and produced by Rupert Ryle-Hodges and Matt Carver. Britannia is created by Jez and Tom Butterworth and Vertigo Films’ James Richardson who all act as Executive Producers together with Neal Street Production's Nicolas Brown, Pippa Harris and Sam Mendes.
All episodes of Britannia series three will TX on Tuesday the 24th of August on Sky Atlantic and NOW. Viewers can catch up on all episodes of the first two series of Britannia on-demand on Sky and NOW. The series was commissioned by Zai Bennett, Sky’s Managing Director of Content with Gabriel Silver as the Executive Producer for the series for Sky Studios.
Image - Sky