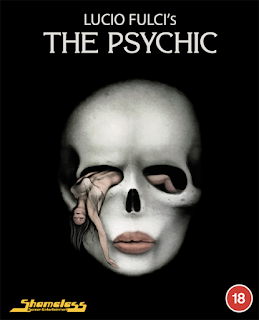 With the re-mastered film coming to Blu-ray and On Demand next month, Ren Zelen watched the 1977 Italian horror classic The Psychic...

Lucio Fulci is one of the names most synonymous with Italian Horror. He was behind the creation of City of the Living Dead and the infamous Zombi 2, although he is probably most well-known for co-writing and directing films in the Italian ‘Giallo’ subgenre, including Don't Torture a Duckling and Lizard in a Woman's Skin.

However, before he began toying with the gory and grotesque, Fulci established himself in thrillers and chillers. It is in this genre that his film The Psychic a.k.a. Sette Note in Nero, belongs. Here, Fulci manages to restrain himself in terms of brutality and blood, concentrating instead on building up atmosphere and tension.

The film begins on October 12th, 1959, when we witness the suicide of a woman as she throws herself off a cliff in Dover and is shattered against the rocks. At exactly the same time, her young daughter Virginia, hundreds of miles away at school in Italy, has a vision of this horrific death.

Eighteen years later, Virginia Ducci (Jennifer O'Neill), now a woman in her late twenties, bids her wealthy, handsome husband farewell as he boards a private plane to attend a meeting.

As she drives herself home in her Rolls Royce, she has to pass through a long, dark tunnel. While doing so she is overcome by a series of images in a waking dream - a broken mirror, a room decorated in blood-red satin, a yellow cigarette smouldering in an ashtray, a letter hidden under a stone bust, a hole being bricked up in a wall, a yellow taxi, a limping man, a magazine cover depicting a beautiful model, and the blood-spattered face of an elderly woman.

Shaken by what she has glimpsed and convinced that she has been a supernatural witness to a gruesome murder, Virginia turns to a trusted friend, parapsychologist Luca Fattori (Marc Porel).

Then, while her husband Francesco (Gianni Garko) is still away on business, Virginia decides to surprise him on his return by restoring an abandoned Palazzo that has been in his family for years. However, when she explores the house, she is shocked to stumble across a room which seems to contain elements of the murder in her vision.

Driven by her psychic flashes, Virginia takes a pickaxe and proceeds to demolish part of a wall where she indeed discovers human remains. On finding the skeleton, she becomes determined to discover the truth about what happened to the victim.

However, when the police become involved, the skeleton is linked to the disappearance of a young woman who had an affair with Virginia’s husband Francesco, some four years earlier. As the investigation continues, Francesco is arrested and held on suspicion of her murder and Virginia sets out to discover the truth behind her visions. 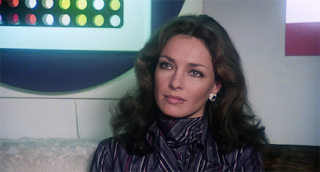 Fans of Fulci and his Giallo films should be aware that The Psychic is neither a typical Giallo nor a typical Lucio Fulci movie. Unlike other exponents of the genre, Bava and Argento, famous for vivid, eye-popping colour in their films, Fulci chooses a dark, stripped-down palate of mostly grey, blue and black. Likewise, the terror here is more cerebral than visceral, relying on atmosphere and growing unease. The film's most unsettling moments are not scenes of violence, but Virginia’s disconnected, disturbing and surreal visions, relentlessly repeating themselves in her mind's eye.

The Giallo directors, including Fulci, attracted much criticism regarding the questionable treatment of their female stars and their on-screen characters. In The Psychic, while Jennifer O'Neill certainly portrays a beautiful woman under threat, her Virginia is not a typical Giallo victim-of-a-gory-death. She is vulnerable, but she is also curious, dogged and keen to turn amateur detective, fully aware that she may be heading into dangerous and violent territory.

Composer Fabio Frizzi is known for the eerie and hypnotic scores he created for Zombi 2, City of the Living Dead and The Beyond. Frizzi's collaboration with Franco Bixio and Vince Tempera on the score for The Psychic is integral to the film's suspenseful set pieces, so much so that Quentin Tarantino saw fit to include its main musical theme in a prominent sequence from 2003’s Kill Bill: Volume 1.

Although The Psychic is very much a film of its time, Fulci manages to craft a suspenseful and moody piece that concentrates on building momentum to its revelatory climax. The clues pertaining to Virginia’s ‘visions’ unravel themselves slowly, piece by piece, until the puzzle finally comes together, and it is the plotting, stylish camerawork and editing which make Fulci’s film an effective chiller.

Shameless Films present Lucio Fulci's horror classic The Psychic on Blu-ray and on demand on 9th August. Pre-order the Blu-ray direct from here.
Email ThisBlogThis!Share to TwitterShare to Facebook