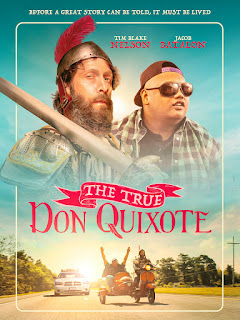 "Before a great story can be told, it must be lived." Coming to digital platforms next month, thanks to Signature Entertainment, watch the trailer for The True Don Quixote...

Down on his luck, Danny (Tim Blake Nelson – O Brother Where Art Thou, The Ballad of Buster Scruggs) escapes the world around him by diving deep into the fantasy novels that bring him comfort and joy. Tales of noble knights and daring sword fights.

Diving a little too deep, he soon begins to believe that he himself is a great knight. Grabbing his cardboard armour, a sword and roping in his trusty squire Sancho (Jacob Batalon - MCU’s Spider-Man Franchise), they embark on an insane adventure, where great lessons are learned along the way.

Written and directed by Chris Poche and based on the classic Cervantes tale, Signature Entertainment presents The True Don Quixote on Digital Platforms from 2nd August.