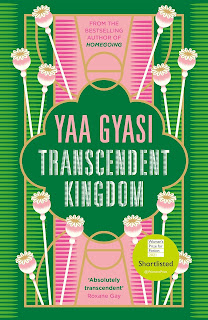 Tony Cross is reading all the books on the Women’s Prize for Fiction shortlist ahead of this year's awards in September. Here are his thoughts on Transcendent Kingdom by Yaa Gyasi...

This is the sixth and final book on the shortlist for the Women’s Prize for Fiction 2021. Like the other five it is a book worth reading. It is at this point I normally list a series of the book’s themes, but I feel that the real strength of this book is the writing.

The story is told in first person by Gifty. Gifty is a scientist, studying the neurological causes of addiction. She is supposed to be writing her paper but is not. She tells the story of her life and that of her family. Her mother came from Ghana with their young son, Nana. Her father followed. And then so did Gifty.

The book is so well-crafted. The way it weaves the past and the present together so neatly. The way the ongoing events of life and woven in with thoughts on religion and science. Gifty’s upbringing had been in an Evangelical Church but then she has become a scientist. Gyasi uses that clash of cultures to explore transcendence and redemption. There is also an interesting comparison made between the mostly white Evangelical Church of Gifty’s childhood and the Church she attends in Ghana and the different ways that God is seen and worshipped.

Gyasi’s debut novel Homegoing ranges further across time. Outlining a black experience of the world from the modern world to the 18th century. It illustrates the ongoing damage done by slavery and colonialism not just financially but psychologically. Several books I have read from the Women’s Prize for Fiction shortlist touch upon similar themes: violence, addiction, racism, colonialism, misogyny. The way that black life is touched by humiliations petty and significant.

I am cautious, as I was with my review of Brit Bennett’s The Vanishing Half, that I do not stomp all over an experience I have never lived. If you want to understand race in the modern world you would not go far wrong reading The Vanishing Half, How the One-Armed Sister Sweeps Her House and Transcendent Kingdom. The question though is what you do as a white person – in my case a white man - once you have read those books. Is it enough just to sit here and wave a reading list around as if that makes you a better person? Are these books that you can put down after you have read them and have an unaltered perception of the world?

Again, though I feel I am not doing a book justice. I feel like I am focusing on one aspect of the story. I hate it when I struggle to express what it is in a book that makes it worth reading because your interaction with it is so personal. I never found myself wanting to put it down. Gifty was telling us more than she had told her friends and family. We are privileged to be allowed to hear Gifty’s story. To be allowed in.

Words. The right ones are never around when you need them.