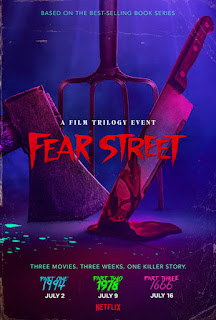 Ahead of tomorrow's debut of the first film in a 3 part Netflix adaptation of R L Stine's Fear Street books, here's a short interview with the trilogy’s writer-director Leigh Janiak...

R.L Stine’s best-selling horror series Fear Street has been frightening readers for 30 years, and now a whole new generation of fans are about to get spooked. With a story spanning over 300 years and told over the course of three weeks, our bold Fear Street film trilogy starts with Part 1 in 1994 when a group of teenagers discover the terrifying events that have haunted their town for generations may all be connected — and they may be the next targets. Following Shadyside’s sinister history, Fear Street jumps to 1978 in Part 2 and concludes with Part 3 in 1666. The films will debut a week apart on Netflix beginning July 2nd.

In this interview for Netflix, the trilogy’s writer-director Leigh Janiak about the innovative release schedule, how she turned the horror genre on its head, and recasting the same actors in different roles.

How did you first get involved with these films and what drew you to this project? Were you an R.L. Stine fan?

I grew up reading the Fear Street books. I remember being drawn to them because they felt edgy; there was blood, there was sex, there were all of the things that felt cool. I was a teenager in the ’90s, so when Peter Chernin and Kori Adelson, an executive at Chernin, first approached me about being a part of these films, it just felt like it hit the sweet spot of my teenagedom. I was looking for buoyancy and fun in my next project, and Fear Street was perfect. I think a lot of people who grew up with these books feel the same way and Kori knew there was potential to create a great franchise around them. Peter had this great idea of creating an event around these films where they would be released one after another, but the idea of how that would actually work hadn't been cracked, and that challenge was really what drew me to the project.

How did you crack the story and structure of the films?

The central question was: How do you get an audience to be so engaged in a movie that they want to go see the next installment immediately? It’s a common exploration for a TV series, but not so much for features. Usually with traditional feature sequels, you have that year or two in between so people are just hungry for more of the world. So for us, we cracked the idea when we started thinking about the project as a hybrid between film and TV.

The project started to come together around this idea of the systemic oppression that permeates culture and tells certain people that you’re “other” and you are never going to win. And I think that's a common thing to feel growing up, especially for anyone who’s been born into a world they feel like they can’t escape. The Shadysiders are born into this world where their fate has already been determined for them. 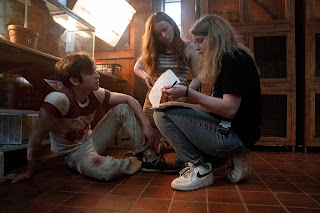 How did you go about adapting the sprawling universe of the books into these films?

The stories within R.L. Stine’s books are centered on this idea of infinite repeatability. Every story takes place in this town called Shadyside and focuses on a different person who lives on Fear Street, but the films aren’t a direct adaptation of any individual story. The spirit of the books is definitely infused throughout — it’s embodied in our story, our characters, and the overall craziness that ensues — but we created the idea of Sunnyvale existing next to Shadyside and the history behind these two towns. The Fier family and the Goode family are names from the books, but we created the mythology in the films.
Were there any horror tropes that you wanted to upend with Fear Street?

I thought the films provided a good opportunity to make our protagonists the ones who aren't usually the protagonists in a horror movie. Up until very recently, straight white people were the only characters who ever lived at the end. So it was important to me and my writers that Fear Street was led by people who society has, again, traditionally called an “other,” and that's kind of where this idea of having our main characters be queer came from. We wanted to tell a love story and we wanted it to be true to the experience of being queer in the 90s. We wanted to make their relationship feel authentic to what a gay experience might’ve been like outside of a modern lens. Sam and Deena aren’t living in a fully safe world where everyone can know about them. And that was really important in shaping their journey, which is difficult because I think, for some viewers, Sam can be a little unlikable at first because she's denying who she is and trying to be this other person, but I think it was important to show that that was the experience for so many kids.

Talk about the decision to use the same actors for various roles.

I've been obsessed with shows like Quantum Leap that use the same actors, but put them in different time periods. There’s something really satisfying about it. I’m also just personally interested in the idea of the past repeating itself, of ideas of reincarnation and being attached to your ancestors. I just thought it was fun. And I thought it would also be satisfying to be able to revisit characters that we had killed in the first two movies and to see them again.
The Fear Street trilogy kicks off July 2nd on Netflix, followed weekly by parts 2 and 3.
Email ThisBlogThis!Share to TwitterShare to Facebook