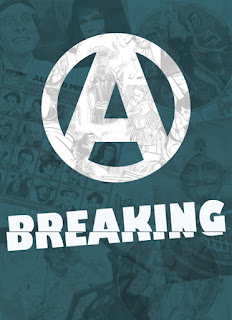 BREAKING NEWS... no, seriously, AUK Studios are introducing a quarterly newsletter/magazine called Breaking [so it's news about Breaking... see? - Ed]. Find out more and how to download your own FREE COPY...


Press Release
BREAKING is the new AUK magazine, the first issue being released this July, it features announcements across books, audio, film, magazine and game formats. The magazine will include behind-the-scenes insights, background articles on the various actors and creatives involved in creation of these releases, and lots more!
There’s going to be the opportunity to see behind-the-scenes of one of the UK’s leading indie publishers, creators and distributors of entertainment media.
For the first issue of BREAKING, you’ll get to read about Alfred Molina, the star of our brand-new exciting audio release, ‘There Used To Be A Me’. Molina has undertaken the huge role of narrating Peter Sellers and all of his characters and is directed and produced by Barnaby Eaton-Jones.
You’re also going to read about the full Venna’s Planet cast for the upcoming audio drama, the exclusive Dracula graphic novel ‘The Virgin’s Embrace’ and read all about Kenneth Williams’ life in honour of our new audio play ‘Screaming Queens’.
Offering the chance to see all of what AUK does, ‘For the Love of Authors’ will show a range of books we’ve published at Andrews UK, who the author is and where you can find the book! This gives readers the chance to find out some of the fun-filled things happening with AUK and who the team is behind the many projects.
AUK Studios have had a massive update into creating and releasing many new projects this year, venturing further into the world of audio, film, magazines and games. BREAKING magazine is the newsletter for everyone to stay consistently updated with everything going on around AUK Studios.
Go grab your FREE e-book copy now:

FULL CONTENT LIST
Who is Alfred Molina?
RECENT RELEASES
Robin Evans’ Venna’s Planet
WHAT’S NEW
Who is Peter Sellers?
Learning with Sam the Robot
The Voices of Dracula
‘Carry On’ with Kenneth Williams…
The Cast of Supermind!
Popular Retro
Throughout this year you can expect many more announcements from the team at AUK Studios, from documentaries to audio drama, magazines, book and even an AUK app! All will be revealed in BREAKING, the official AUK Studios quarterly magazine.
Image - AUK Studios