Audio - The Year of Martha Jones 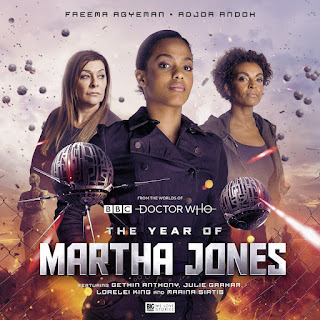 Marina Sirtis joins Freema Agyeman and Adjoa Andoh alongside a cast of TV legends in The Year of Martha Jones from Big Finish Productions...

This brand-new box set of full-cast audio adventures from the worlds of Doctor Who is due for release in December 2021 and features stars of Star Trek: The Next Generation, Game of Thrones, Alien and The Sarah Jane Adventures.

The Year of Martha Jones finds the Tenth Doctor’s companion returning for three new stories of her own, exploring the year she spent travelling the Earth, warning humanity about the Master and spreading hope with tales of her friend, the Doctor.

Of becoming part of the world of Doctor Who, Marina Sirtis said: “When people ask me who my first Doctor was, it was the First Doctor. As an actor, I’m all about performances, and Doctor Who has always employed fine actors – it's a very unique and special show.

“And this box set tells us that stories are important, which is why they last – they are handed down from generation to generation, and are what give our imaginations flight.”

In the third episode Deceived, listeners meet agent of the Master, Mr Strand, played by Game of Thrones actor, Gethin Anthony. Of recording, he said: “This has just been the most fun – the feeling of adventure and escapism and imagination that you can get through voice performance is amazing.

“The scale of the stories you can get to tell in a very efficient amount of time, in which you can go anywhere in the universe (as we tend to do) - it always reconnects me with why you get into this crazy path in life in the first place. It's like playing dress up, but with your voice.”

Legendary voice artist Lorelei King (Alien: Covenant) is returning to Big Finish to play resistance leader Jessie Grant. She said: “I love my character – she really is a very maternal character, in that she is making sure that everyone is okay. She has her private reasons for this that we learn, and although she has a hard exterior, it’s a hard world!

“And this was so much fun – it’s got all the survivalist elements which I really like!”

And returning to the Whoniverse after appearing on Doctor Who and The Sarah Jane Adventures, actor Julie Graham plays Miss Beecham, an ambitious and efficient agent of the Master. She said: “I love the whole Doctor Who franchise – it's just such a national treasure, it’s part of our Britishness and it’s just lovely to be a part of it in any way whatsoever. And what’s lovely about doing audio is that there’s no pressure, and you can really play with it and go for it.”