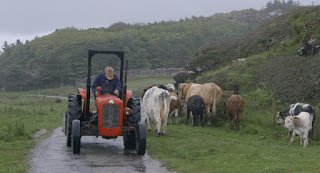 With its World Premiere last night at Edinburgh International Film Festival, Susan Omand put on her wellies and watched Prince of Muck...

This is how we are introduced, at the start of this beautiful documentary, to Lawrence MacEwen, standing on the beach scratching the backs of his beloved cattle: every inch the Prince of Muck. That is not an insult by the way. The Isle of Muck is a tiny privately owned island, just over 2 square miles in size, off the west coast of Scotland, which has been in the MacEwen family for the best part of the last century. Around thirty people call it home, there are a few small guest houses, a hotel, a primary school, a community hall, no shop, church or post office. There is a ferry that stops by a few times a week and… well… that’s it. The majority of the land area is grazing for the farm, now run by Lawrence’s son Colin (Lawrence’s daughter Mary runs the hotel) while Lawrence and his wife Jenny live in a tiny cottage close by.

But this isn’t a documentary about the island or its community (as we find out in the Q&A that goes with the film, nobody else, not even Colin, wanted to take part in the film), it’s about Lawrence himself. Or rather it’s a nostalgic look backwards, an elegy almost, to his fast-disappearing way of life. There is no running commentary as such, nobody asking questions. Instead, alongside the dreamlike scenery of the island and the sea and a stunning soundtrack supplied by David Macauley, we get grounding-posts of information from diary entries, headlining high times and low times in his life, the birth of a child (listed as the third thing for that day after the weather report and a note about the silage being cut), the death of a father, a brother, a friend. I come from a farming background and I know how important the writing of the “daily diary” is, or was, to keep a record of plantings, harvests, livestock sales etc. I still have my mother’s diaries from my own childhood and listening to similar diary entries being read for the farm on Muck really resonated with me and seemed a very appropriate way to tie the story together.

As well as candid shots of Lawrence’s life today, from his cold bath in the morning, to feeding and milking his beloved cows, to playing with grandchildren, walking in the wilds and writing in his diary, the documentary also makes use of some wonderful TV archive footage, showing the island and Lawrence back in the day, including news interviews and a wonderful discussion with the venerable Tom Weir, who visited the island for one of his Weir’s Way programmes.*

It isn’t all fairytale nostalgia though. Although we don’t really hear from any of the rest of the islanders, apart from the odd heated kitchen table conversation with wife Jenny, there is a sense of friction that runs under the documentary. Lawrence may have handed over the reins for the day to day running of the island to his son, Colin, but it seems like he’s not ready to let go and there’s a real feeling of sadness, loss and enforced detachment comes through in his words. Colin wants to do things differently, on the farm and on the island, and won’t listen to his father’s advice, no matter how outdated those words of advice might now be, as Jenny points out. There are hints of arguments, impatience and bitter silences leading from Lawrence’s refusal, nay, inability, to let things move on without him. Some of the implications made for uncomfortable viewing and I felt for both sides in the fray.

However, as Lawrence says in the film, “As long as I have my cows I can lead an independent life,” and that’s exactly what he does and will, no doubt carry on doing until he’s happy to “let the cows walk over my grave.”

* Weir’s Way was an incredibly popular STV series which ran from the mid 70s to the early 80s, where Scottish climber and author Tom Weir walked around Scotland, exploring its landscape and natural history and meeting and talking with colourful people along the way.
The 74th edition of EIFF runs from 18 – 25 August 2021. The full programme is available on www.edfilmfest.org.uk and you can book tickets to see Prince of Muck in Edinburgh Filmhouse here.
You can also watch The Prince of Muck online by renting is at Filmhouse at Home from 07.20 PM on Thu 19 Aug. Once you have rented the film, you have a 72 hour watch window to start watching the film. Your last chance to rent the film is at 07.20 PM on Sun 22 Aug.
Images - Edinburgh Film Festival
Email ThisBlogThis!Share to TwitterShare to Facebook