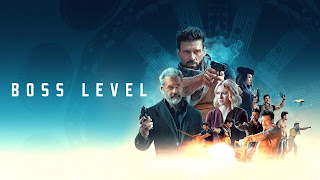 Roy Pulver's died 144 times and counting, stuck in a time loop having to relive the same day over and over again. Nothing like Source Code or Edge of Tomorrow, honest, watch the trailer for Boss Level, now available on Prime Video...

Trapped in a time loop that constantly repeats the day of his murder, former special forces agent Roy Pulver (Frank Grillo) uncovers clues about a secret government project that could unlock the mystery behind his untimely death. In a race against the clock, Pulver must hunt down Colonel Ventor (Mel Gibson), the powerful head of the government programme, while outrunning skilled ruthless assassins determined to keep him for the truth in order to break out of the loop, save his ex wife (Naomi Watts) and live once again for tomorrow.
Directed by Joe Carnahan, who co-wrote the screenplay with Chris and Eddie Borey, the film stars Frank Grillo, Mel Gibson, Naomi Watts, Annabelle Wallis, Ken Jeong, Will Sasso, Selina Lo, Meadow Williams and Michelle Yeoh.